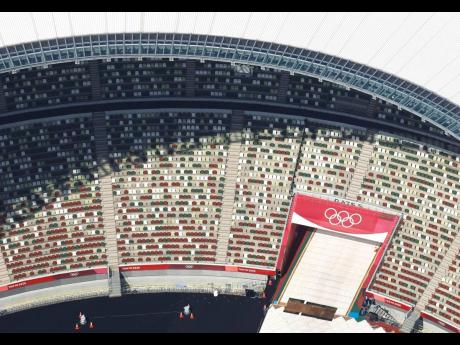 File
In this aerial photo, the Olympic Rings are seen with spectators’ seats at the National Stadium in Tokyo, Japan, ahead of the Tokyo Games, on Monday, June 21.

Nearly three out of every 20 track and field athletes whose social media feeds were monitored in a study at the Tokyo Olympics were subject to abusive posts, and women were targeted in more than 85 per cent of those posts, according to results released yesterday by the sport’s global regulator.

World Athletics released observations culled from more than 240,000 Twitter posts related to 161 athletes who competed in Tokyo earlier this year. Of those, 132 were found to be abusive and 65 per cent of those were “gravely abusive,” according to standards set in the study.

Twenty-three of the 161 athletes whose accounts were monitored were targets of the abuse, and 16 of those 23 were women.

“This research is disturbing in so many ways, but what strikes me the most is that the abuse is targeted at individuals who are celebrating and sharing their performances and talent as a way to inspire and motivate people,” World Athletics President Sebastian Coe said in a news release.

The study found that 63 per cent of the identified abuse was directed at just two athletes, who were black and female, and the two most common categories of abuse were of a sexist (29 per cent) and/or racist (26 per cent) nature.

“Increasing evidence indicates that this is driven by a huge rise in prejudice against race, gender and social status,” Max Siegel, the CEO of USA Track and Field, said in the release. “Simply put, this type of behaviour is disgusting and utterly unacceptable.”

The study follows the launch of the World Athletics Safeguarding Policy, which the federation described as the implementing of “a process of protecting vulnerable persons, children and adults, from harassment, abuse and exploitation (and) creating a safe and welcoming environment, where everyone is respected and valued”.

In the news release laying out the results of the social media study, World Athletics said the data provide it a basis “to work more closely with social media platforms to tackle this issue”.