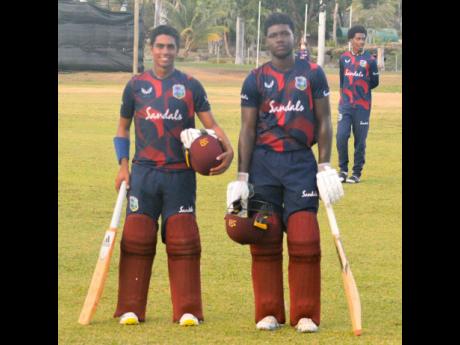 Jamaican left-handed batter Jordan Johnson was in scintillating form yesterday as he stroked an unbeaten century to lead West Indies U19 ‘B’ to an eight-wicket win over West Indies U19 ‘A’ in their Rising Stars warm-up 50 overs match at the Coolidge Cricket Ground in Antigua.

The Wolmers’ Boys’ player, and Guyanese opener Matthew Nandu, who scored an unbeaten 85, put on 184 runs for the third wicket after their side was at 56 for two.

Earlier, Nathan Edward bagged three for 45 and Vasent Singh two for 47, to restrict the ‘A’ team to 239 all out in 49 overs and three balls. Shaq Parris top-scored with 60 with Kevin Wickham chipping in with 55. Giovonte Depeiza made 49.

The West Indies Rising Stars team is preparing for the ICC U19 World Cup, which it will host for the first time. The event will see 16 teams travelling to the Caribbean to compete in 48 matches from January 14 to February 5 in Antigua, Guyana, St Kitts and Nevis, and Trinidad and Tobago, with 10 venues hosting matches.

The format will see the top two teams from each of the four groups advance to the Super League while the remaining teams feature in the competition across 23 days of competition.