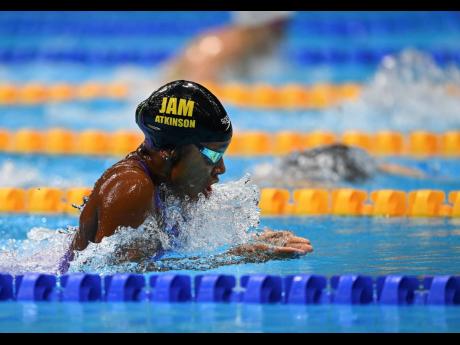 ALIA ATKINSON’S London Roar team glided to a second successive victory in the International Swimming League (ISL) play-offs in Eindhoven, Holland, on Thursday, with the Jamaican making a three-part contribution to the result.

With the 32-year-old Jamaican setting a season’s best in a dominant 50-metre breaststroke performance, the Roar moved closer to qualifying for the ISL finals.

Atkinson sparkled in the 50-metre breaststroke, slicing across the pool in 29.19 seconds, her fastest time this year and within touching distance of the 29-second barrier she last broke in 2018.

She also took one for the team in the 100-metre butterfly, clocking 57.32 seconds in sixth position; and did her part in the Roar’s third 4x100m medley triumph in a row.

With Atkinson charging the breaststroke leg in one minute, 03.76 seconds, the Roar touched home first in three minutes, 47.48 seconds.

It appears that the five-time Olympian is peaking right on time. Her 50-metre breaststroke victory avenged a loss to Briton Imogen Clark, who beat the Jamaican when they last met at the distance. On that occasion, Clark set a British record of 29.32 seconds. This time she was third in 29.96 seconds, with Youth Olympic and European champion, Anastasiya Gorbenko of Israel, trailing Atkinson in 29.68.

Peaking for the play-offs has been Atkinson’s plan all along. She worked her starts, turns and drives in training before going to Eindhoven.

“I notice it’s not as springy as it used to be, whether that’s age or something else, I don’t know,” she said in October. “But seeing if I can bring that back for one last swim.”

National coach Gillian Millwood is hopeful that the champion breaststroker will dip under 29 seconds before she retires early next year.

“Even on the 100 breast that she won at one of the previous matches, she did 29 high for the first 50, so she is going out very, very quick. So this is in line with a 28 finish,” reasoned coach Millwood.

Confirming Atkinson’s focus on turns, Millwood added: “She’s one of those athletes who just goes and goes and goes, especially knowing how to use those walls. She’s an energiser bunny, plain and simple. You crank up that turbine and you just let it go. That is Alia. So this 29.1 is well in line with that. I want to be hopeful and say 28 low to cap off this career.”

The Jamaican has crossed the 29-second barrier three times in her career and owns the world record time of 28.56 seconds.