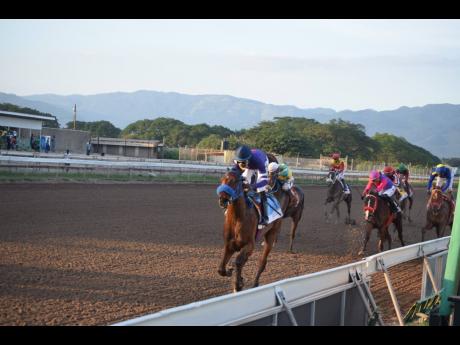 BRINKS OVERHAULED speedy filly PRNCSSHOOTINGSTAR a furlong and a half out in yesterday’s Pick 3 Super Challenge to remain unbeaten in two starts, landing the seven-furlong event for two-year-olds by three and a quarter lengths.

An impressive seven-and-a-half length winner on his November 6 debut at five and a half furlongs, BRINKS caught the fancy of six-time champion Omar Walker, who stayed aboard Ian Parsard’s runner even though he had booted home Philip Feanny’s POWER a week later at six furlongs.

Brimming with confidence after BRINKS’ flashy 1:14.4 for six furlongs at exercise last Sunday, Walker kept the Bern Identity-Indian Bluff colt pressing PRNCSSHOOTINGSTAR and made his bid off the home turn.

BRINKS quickened away from the filly and was clear at the end, clocking 1:27.1 to finish ahead of 16-1 outsider, TEKAPUNT, who relegated PRNCSSHOOTINGSTAR close home.

Richard Azan’s pair, SLAMMER and PERFECT BREW, the first two past the post in last month’s Cash Pot Trophy at six furlongs, surprisingly failed to make the frame, run off their legs by PRNCSSHOOTINGSTAR and BRINKS.

Walker, who returned to boot home imported CLASSICAL ORB for Parsard in the 10th event, closed the late double.

Nunes, who had overhauled DaCosta on November 13 when FURTHER AND BEYOND nailed his rival’s BILLY WHIZZ in the $6m Jamaica Cup, expected his stable star to repeat in the seventh event but Azan’s imported EROY got first run on the leaders and held on by a length and a quarter at seven and a half furlongs.

DaCosta had, by then, significantly reduced the deficit with a hat-trick of winners – UNCLE FRANK, SUPER DUPER and TRADITION – races four through six, before TEKAPUNT closed to take second in the Pick 3 Super Challenge and stablemate DEEZI grabbing the crumb from the purse with a sixth-place finish.

Racing continues today with a 10-race card with the first post at 11:45 am.