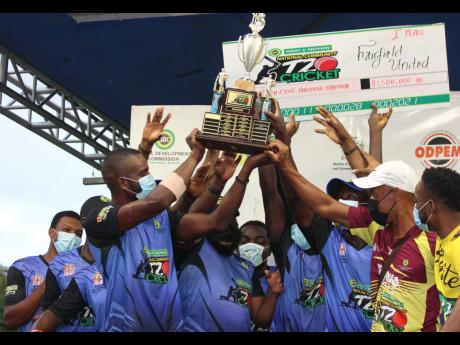 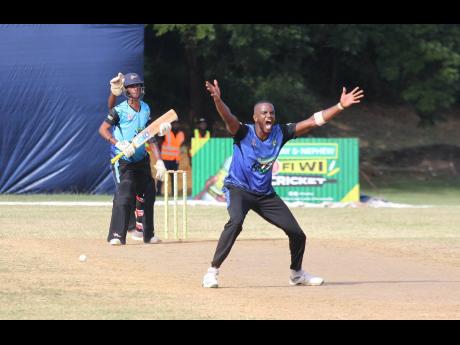 In what was a low-scoring but exciting final, Manchester’s Fairfield United claimed their first Social Development Commission (SDC) National Community T20 title with a four-wicket win over Race Course of Clarendon at the Noranda Sports Club in Discovery Bay, St Ann, yesterday.

Fairfield’s victory was set up by an all-around man-of-the-match performance from Sherdon Allen, who first claimed three wickets to restrict Race Course to just 80 all out, before returning to hit a top score of 22 from 17 balls to help Fairfield over the line at 83 for six.

The Manchester side made good their decision to bowl first on a wicket that was conducive for seam bowling, as the Clarendon side were in tatters from the opening over when Marcel Parchment was bowled for a duck by Leighton Leslie, with the second ball of the innings.

Leslie then accounted for the other opener, Wayne Davis, for 17, to leave Race Course in further trouble at 23 for two in the third over.

Wickets continued to tumble with regularity, as the Clarendon side was at one stage reeling at 62 for nine, thanks to three wickets for Leslie and three for Allen.

Former West Indies and Jamaica player Krishmar Santokie top scored with 21, as Race Course crawled their way to 80 all out in 15 overs and three deliveries.

With a small total to chase, Fairfield United made heavy work of the run chase, as they also struggled while losing wickets with regularity.

When Santokie trapped Allen lbw for 21, Fairfield were 53 for four in the 13th over. However, Sanjay Walker with 20, Leslie, six not out, and Courtney Allen, seven not out, saw the Manchester side over the line in 17 overs and a ball.

For player-manager Brian Clarke, the victory was a welcome one, securing the SDC title for the parish of Manchester for the first time in 11 years.

“Coming into this final, I got countless messages from the members of the Fairfield community asking us to take this one home for the parish, and I am happy that the team was able to deliver in the final,” he said.

Santokie was dejected that his team did not get to celebrate a third SDC title, despite coming into the final after facing tragedy just days ago.

“Before we even started this game, we were on the back foot because we lost one of our players on Friday,” he said. “He was a member of the team from the first time we played in the SDC tournament. However, we tried to put it behind us but, unfortunately, we have played very well throughout the season and had our bad game in the final.”