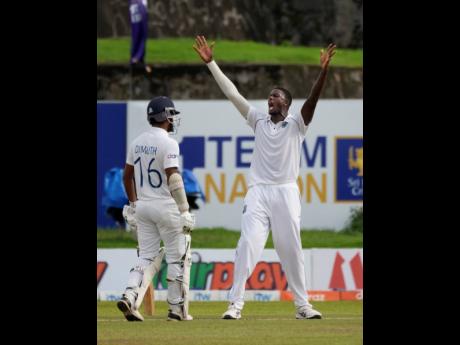 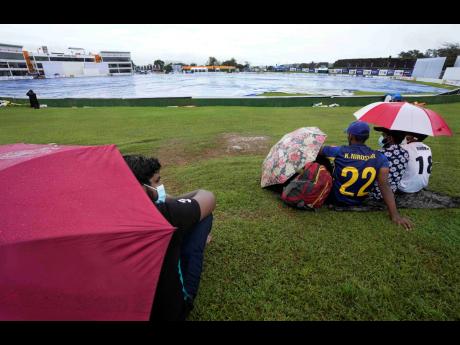 AP
Galle cricket stadium ground is seen covered with plastic sheets while fans await for play as it rains during the day one of the second Test cricket match between Sri Lanka and West Indies in Galle, Sri Lanka, today. 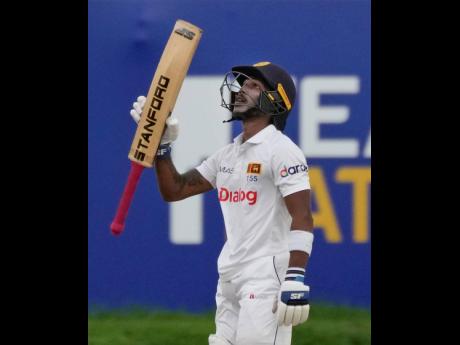 AP
Sri Lanka's Pathum Nissanka raises his bat after scoring a half century during day one of their second Test cricket match against West Indies in Galle, Sri Lanka, today.
1
2
3

Persistent rain wrecked the opening day of the second Test here today, allowing only 2 ½ hours play and frustrating West Indies’ hopes of making inroads in their search for a series-levelling win.

The inclement weather forced the abandonment of the first two sessions at Galle International Stadium, but Sri Lanka made the most of the nearly 35 overs possible, reaching 113 for one, with opener Pathum Nissanka unbeaten on 61.

Captain Dimuth Karunaratne missed out on another half-century when he perished for 42, as West Indies struggled for wickets after play finally got underway at 3 p.m.

Despite the lack of breakthroughs, assistant coach Roddy Estwick said the Caribbean side’s bowlers had been focused in their approach.

“I thought it was good. We could’ve been a little better, with maybe a little but too many boundary balls, but I thought that Kemar (Roach) and Jason (Holder), bowling 13 overs on the trot, went past the bat quite a bit,” Estwick pointed out.

“Their captain (Karunaratne) is in good form (but) we stuck to our plans well. We wanted to take the stumps out the equation and make him hit the ball through the offside and I think we achieved that.

“He scored 40-odd off 90 balls so I thought all in all we bowled well. We could’ve gotten one or two more wickets, but that’s how cricket goes.

“We’ll come tomorrow, we’ll work hard. We’ll make sure we keep reviewing our plans and then go out and try to execute them.”

Roach, who replaced Shannon Gabriel, paired with Holder to ensure a testing first hour for the Sri Lankan openers, but both survived to take the hosts to 43 without loss at the first drinks break as they put on 106 for the first wicket.

Unbeaten on 27 at the break, Nissanka progressed well afterwards, smashing left-arm spinner Veerasammy Permaul – playing only his first Test in six years – for a six over long off to move into the 40s before taking a single to the deep a few overs later off the same bowler, to raise his third Test half-century.

All told, the right-hander has faced 109 deliveries and counted four fours and a six.

Karunaratne, meanwhile, coming off a hundred and a half-century in the first Test, faced 90 balls and struck half-dozen fours before punching a return catch to off-spinner Roston Chase, after finding the boundary on either side of the wicket earlier in the over.

Only 22 more deliveries were possible in the day before fading light ended play prematurely, with new batsman Oshada Fernando unbeaten on two.