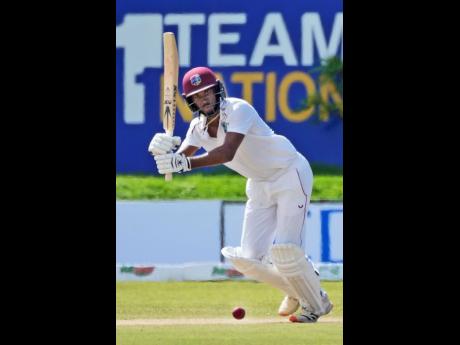 West Indies Test captain, Kraigg Brathwaite, wants his team to spend the next few months working on its batting.

The skipper is unhappy after the West Indies batting collapsed yesterday for the fourth time in two Test matches against Sri Lanka.

The fragility of that batting was once again exposed, as the regional side handed Sri Lanka victory by 164 runs on the final day of the second Test in Galle.

Chasing an improbable target of 297 runs on the fifth day of the Test, the regional men were blown away for a mere 132 in their second innings with the side losing their last eight wickets for 40 runs.

“Batting-wise we let ourselves down, we just didn’t get big enough totals to put enough pressure on Sri Lanka,” said Brathwaite at the end of day five yesterday.

Spinners Ramesh Mendis and Lasith Embuldeniya took five wickets each to propel Sri Lanka to the win. The result meant a two-nil series win and retention of the Sobers-Tissera trophy for the Sri Lankans.

Embuldeniya had best figures of 5-35 while Mendis recorded 5-66 and ended with 11 wickets in the match.

The West Indies will have a couple of months to get their batting in order before England visits the Caribbean for three Tests in March and Brathwaite is urging the players to put in the work to remedy the situation.

“We have some first-class games potentially in February, which is good. The guys can get three to four games to spend time in the middle. It really boils down to having the discipline and putting in the work and doing it for long periods,” said Brathwaite.

Speaking of putting in the work, Jamaican Nkrumah Bonner followed up his 35 in the first innings with a top score of 44 in the second, while compatriot Jermaine Blackwood chipped in with 36 in the West Indies’ second innings.

Bonner’s batting, in particular, has come in for praise from Brathwaite.

“We also saw some good batting from (Nkrumah) Bonner and Joshua (Da Silva),” he said.

But it was in the bowling department where Brathwaite saw the most positives for the regional team.

“It was good to see [Veerasammy] Permaul coming back into the team after a couple of years and getting his first five-wicket haul. Overall, I thought all the spinners put in some really good work, with Roston Chase getting a five-for and Jomel Warrican getting a four-for here.”