Four teams, one spot as Manning Cup Group B hits the high notes 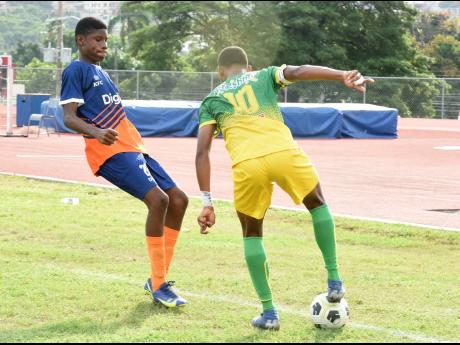 The top two teams from each group qualify automatically, along with the two best third-place teams.

Second-place Excelsior will have the hardest task of the teams as they go up against group winners, unbeaten Camperdown, who have already qualified with 16 points from six games, at Ashenheim Stadium at 12 p.m.

Excelsior sits second in Group B with 11 points but only on goal difference ahead of Jonathan Grant. Tivoli follow with 10 points and St Andrew Technical with nine.

Excelsior coach Xavier Gilbert said their opening-day defeat to Tivoli has led to their current situation and he insists it is up to them to get themselves out of it.

“We have to win this last game to have any chance of advancing. We play the group leaders, so it is going to be a tough encounter.

“The group is closely knitted right now and, as we stand, four to five teams still have an opportunity to advance.

Gilbert believes the game will be a true test of his team’s title-challenging credentials.

“It is going to be a good test for us if we advance. So we welcome the challenge and we just hope we can execute and advance to the next round,” he said.

Defeat for Excelsior and victory for Jonathan Grant will see the latter through. But Jonathan Grant’s opponent, St Andrew Technical, will be looking to create an upset, while hoping other front-runners lose.

Jamaica College (10 points) will try to reclaim top spot in the standings from Kingston Technical (12) when they square off against second-from-bottom Bridgeport (four) in their final group match.

Charlie Smith (nine) go into their final game knowing that anything less than a win against St George’s College (six) will mean they are out.