Time to get uncomfortable

Francis calls for versatile play in second Test vs England 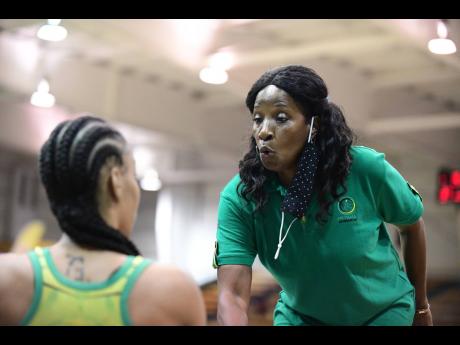 To avoid their first series defeat to England in eight years, national senior netball head coach Connie Francis says her team has to get comfortable in diversifying their skillsets to meet the modern demands of the game.

The Sunshine Girls face the Roses today at 11:00 a.m. Jamaica time in the second Test of their three-match series at Motorpoint Arena in Nottingham, hoping to muster a response to their 55-45 defeat in Sunday’s first game.

Having surrendered a 26-25 lead at half-time in that game, Francis said the focus has not only been on improving on their defence this week, with potential personnel changes, but getting the squad to adapt to playing multiple positions to fill specific needs on the court.

“It’s about playing players out of their comfort zone because what I am looking (for the 2022 Commonwealth Games) is that we have to be versatile in playing one and two positions well. We don’t want the players to only offer one position and that’s it,” Francis told The Gleaner .

“Where netball is going, you have to be able to be that versatile, that flexible, in order to make adjustments to another area of the court that you are not accustomed to, and to do well.”

Additionally, Francis wants her attacking players to help consistently on the defensive side. That need has come to the fore with the need for more zone defence, as opposed to man marking, which she says has been a difficult task to execute regularly during training this week.

“Our attacking team is not marking. I don’t know why they are not responding to marking because I have tried everything in practice. They might show up but they do not show up often in being consistent with the marking (using) body on body,” Francis said. I’m going to go where we can go into a little zoning and see if that will work well. I do have to try things because, for the long term, it is (for the Commonwealth Games).

England outshot Jamaica 30-19 in the second half of the first Test, with crucial turnovers leading to the Roses’ offensive push. Captain Jhaniele Fowler Reid scored 40 of Jamaica’s 45 points in the first Test, pushing Francis to go for more height in attack, which she says has borne fruit in their training sessions this week.

“Smaller attackers seem to be struggling in looking over longer hands in front of them. So if we can get taller players in there when they put up their hand, we can offload the ball quickly. I think that will help us,” Francis said.

Jamaica has not lost a series to England since 2013. The third and final Test will take place tomorrow, also in Nottingham.