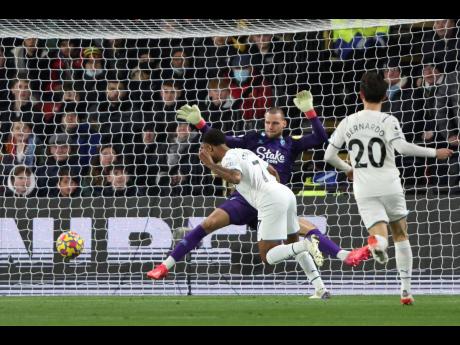 DEFENDING CHAMPIONS Manchester City are on top of the English Premier League (EPL) for the first time this season. And if Pep Guardiola’s team keeps playing like this, it could be difficult to knock City off their perch — even in a tight title race that saw three different teams lead the standings during yesterday.

On a day when previous leaders Chelsea faltered, City displayed total dominance in a 3-1 win at Watford that showed off the kind of fluid passing game that helped Guardiola’s team win three of the last four league titles.

Bernardo Silva scored twice after Raheem Sterling’s early opener as City proved once again that they can do perfectly fine without a recognised striker in the line-up. It was a fifth straight league win for City, who are one point ahead of Liverpool and two in front of Chelsea after 15 rounds.

“It’s always better to be top of the league than second, third or fourth, but it’s still early,” Silva said.

Shook up the title race

West Ham shook up the title race by beating Chelsea 3-2 at home in the early game and Liverpool then needed an injury-time goal from Divock Origi to earn a 1-0 victory at Wolverhampton that put Jurgen Klopp’s team on top for a few hours.

City, though, were in front from the start in the late kick-off.

Sterling scored the opener in the fourth minute as City capitalised on a loose pass and Phil Foden crossed into the centre for Sterling to head home unmarked. Silva then doubled the lead in the 31st by weaving past two defenders before slotting the ball past goalkeeper Daniel Bachmann.

City completely dominated the first half, with 81 per cent possession and could have added more goals before Silva got the third, with a clever curled effort into the top corner in the 63rd.

Watford pulled one back through Cucho Hernandez, who followed up his own shot after it rebounded off a post, to deny Pep Guardiola’s side a ninth clean sheet of the season.

Newcastle finally have a win in the Premier League, 15 games into the season.

Callum Wilson scored late in the first half and Newcastle held on to beat Burnley 1-0 in a game between relegation strugglers.

Burnley had been unbeaten in five games but could muster only one shot on target at St James’ Park. Neal Maupay’s goal in the eighth minute of injury time rescued a 1-1 draw for Brighton at Southampton. Armando Broja’s smart finish put Southampton ahead in the 29th.