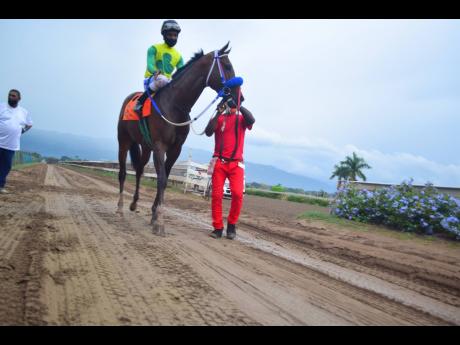 Anthony Minott
FATHER PATRICK (right), with Oshane Nugent aboard, parades after winning the None Such Sprint Trophy for three-year-olds and Up Open Allowance race over six furlongs at Caymanas Park yesterday.

Breaking sharply at odds of 10-1 after 3-2 favourite and stablemate, SHE’S A WONDER, waltzed out the gate behind the field for a second straight race, FATHER PATRICK, on the other hand, finally got it right following scrappy starts in his three previous outings.

Having got the start that was missing in consecutive losses to DUKE, Oshane Nugent asked speedy FATHER PATRICK to challenge the grey and easily shot to the lead leaving the half-mile marker.

Nugent, a patient rider who seems to have struck an understanding with FATHER PATRICK, remained motionless astride the five-year-old until coming off the home turn while DUKE was being pushed two lengths behind.

Unmolested on the lead, FATHER PATRICK quickened away from DUKE when asked to run, leaving stablemate ROJORN DI PILOT to pick apart the grey, grabbing second to close the Parsard exacta.

Nugent, who had guided home Richard Azan’s two-year-old, RAINSVILLE, at a mile in the second event, hit the line in 1:11.4 astride FATHER PATRICK, who was a length and a quarter clear of ROJORN DI PILOT.

DaCosta fell one short of an expected four-timer after down-in-class MY TIME NOW was beaten into third by his rival’s HE CAN DANCE in the sixth event. However, victories by favourites TOMOHAWK, BILLY WHIZZ and I AM FRED, who won at a king’s ransom of 2-1, pushed DaCosta into what could be an unassailable lead, considering the depth of his high-powered barn.

Parchment, who closed the card aboard I AM FRED, had earlier put in a rousing display astride 27-1 outsider, ZION, beating CLARA’S VISION in a driving finish to share the day’s riding honours with Nugent.

Racing continues at the weekend with Saturday-Sunday meets.