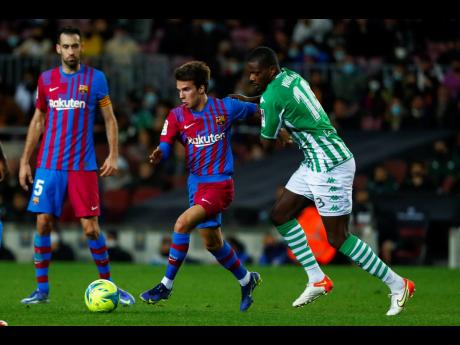 AP
Barcelona’s Riqui Puig (left) vies for the ball with Betis’ William Carvalho during the Spanish La Liga match against Real Betis at the Camp Nou stadium in Barcelona, Spain, on Saturday.

BARCELONA’S FIRST Champions League campaign without Lionel Messi in nearly two decades may come to an end in the group stage if they do not find a way to beat Bayern Munich tomorrow.

It would be the first time since the 2003-04 season that the Catalan club did not play in the knockout stage of the competition. Barcelona are second to Bayern in Group E, and two points ahead of third-placed Benfica. But a draw or a loss in Germany would allow Benfica to advance with a home win against already-eliminated Dynamo Kyiv.

Atlético Madrid is another Spanish club in danger of not advancing, as they sit last in Group B. They have to win at second-placed Porto today and hope that AC Milan draw or lose at home against group winners Liverpool. Villarreal can advance in Group F tomorrow if they avoid defeat at Atalanta, who will move on with a win. In Group G, Lille, Salzburg, Sevilla and Wolfsburg can still advance, with Lille and Salzburg needing a draw. Lille are at Wolfsburg and Salzburg play Sevilla.

Title holders Chelsea and 13-time European champions Real Madrid are among those looking to clinch first place in their groups, which is more likely to secure an easier match in the last 16. Both teams have secured a last-16 spot. Chelsea are tied on points with Juventus in Group H, and are ahead courtesy of a superior head-to-head record, so a win at Zenit St Petersburg tomorrow will guarantee top spot for the defending champions. Juventus will finish group play at home to Malmo, who won the Swedish league on Saturday to retain their title.

Madrid, meanwhile, host Inter Milan today in a match between two teams who have already secured a last-16 spot and who can both still win Group D. Madrid lead Inter by two points, so a point will be enough for Carlo Ancelotti’s team. Then there is the intriguing Group G finale tomorrow, where all four teams — Lille, Salzburg, Sevilla and Wolfsburg — can still finish first.

Club Brugge, Leipzig and Young Boys have no chance of reaching the last 16, but they can still join Borussia Dortmund, Sheriff and Zenit St Petersburg in the play-offs for the Europa League knockout phase. Club Brugge and Leipzig are fighting for third place in Group A behind group winners Manchester City and runners-up Paris Saint-Germain.

Leipzig will host Man City today in an empty stadium, due to coronavirus restrictions, and with an interim coach in charge after deciding to part ways with American Jesse Marsch on Sunday. Marsch himself missed the team’s last three games due to his own COVID-19 infection amid an outbreak at the club, but he paid the price for three successive Bundesliga defeats.

Paris Saint-Germain host Club Brugge in the other group game. Both Leipzig and Brugge have four points. Swiss team Young Boys only have a slim chance of finishing third in Group F, needing a win at group winners Manchester United tomorrow and hoping for a favour from Villarreal at Atalanta.