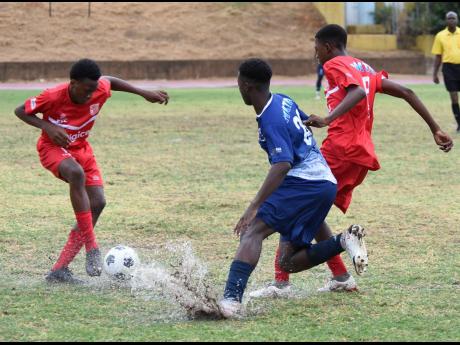 Ian Allen
Daniel Bourne (left) of Bridgeport High School kicks the ball ahead of a rushing Jaheem Frazer (centre) of Jamaica College and his teammate, Devaun Webb. His effort was hampered by a puddle of water after heavy rains pelted the playing field just before the start of their Inter-Secondar Schools’ Sports Association/Manning Cup game on Saturday. Jamaica College won 5-0. 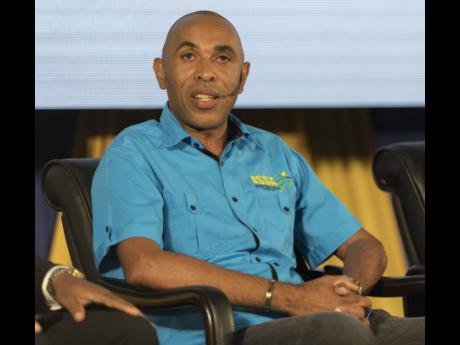 INTER-SECONDARY Schools’ Sports Association (ISSA) President Keith Wellington says that they are hoping to receive a response to their request for a January fan return for football matches by next Saturday. The first rounds of the Manning and...

INTER-SECONDARY Schools’ Sports Association (ISSA) President Keith Wellington says that they are hoping to receive a response to their request for a January fan return for football matches by next Saturday.

The first rounds of the Manning and daCosta Cup competitions will be completed today, with games taking place in central venues across the country and strict COVID-19 restrictions in place, but no fans allowed.

Wellington said that while their goal was always to facilitate a return for the secondary competitions (Ben Francis Cup, Walker Cup, etc), there are no plans at the moment for spectators to be allowed for the Manning Cup quarter-finals and the daCosta Cup Round of 16.

“Our initial proposal was that we would attempt to get fully vaccinated fans for the second phase of the competition, starting in January. We had not asked for permission for the quarter-finals, but we are doing a review of what would have transpired over the last three weeks, and we will see where we are where the admission of patrons are concerned,” Wellington told The Gleaner.

“But we don’t expect to have spectators in before January,” he added. “We want to be able to say definitely what is happening by the end of the quarter-final round, which is next week Saturday (December 18).”

Wellington said that they are working on finalising protocols that will include how vaccinated fans will be verified, as well as how much they will request for the centralised venues, which are dependent on the capacity of each facility. However, he addressed concerns regarding patrons who have been seen in certain locations outside of the venues being able to watch matches, despite the no-spectator stipulation.

At Manning Cup games, particularly at Ashenheim Stadium, Jamaica College, spectators were seen watching games from outside the fencing of the venue, although they were not on the premises.

Wellington said that while the latter may not be constituted technically as a breach, it is still a concern that both the letter and the spirit of the agreed measures are followed.

“I think we have been fairly good in terms of abiding by restricting the protocols, ensuring that there are no spectators at our venues. But there are instances where persons are able to identify vantage points outside of the venues and sometimes gather there to take a lot of what is happening. We have little control over that,” Wellington said.

“We are willing, and we have been working with the authorities to ensure that these breaches are addressed. But we have little control over those gatherings which are in public spaces, which are not under our control.”

However, the proposal for a January return has the backing of National Parent Teacher’s Association Vice President Stewart Jacobs, which he hopes will have a no-tolerance policy and will allow particularly the parents to see their children play this year.

“You have to give some preference to the parents of the student athletes who are out there on the field. Then you can look at alumni coming, and you can look at the family of the coaches. You would want to make sure that it is very even and transparent. What this will do is create an atmosphere for those student athletes who have worked hard despite the pandemic,” Jacobs said.