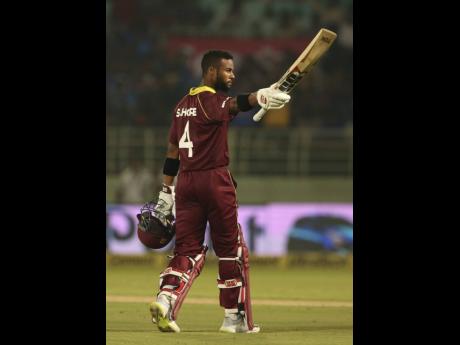 Shai Hope will lead West Indies for the first time after Kieron Pollard was ruled out of the tour of Pakistan starting next week.

While the 28-year-old Hope will preside over the three One-Day Internationals, the 26-year-old Nicholas Pooran will lead in the three-match Twenty20 International series, following on from his stint in the Caribbean earlier this year.

Pollard, appointed two years ago, oversaw West Indies’ wretched campaign at the recent T20 World Cup in the United Arab Emirates, but picked up a hamstring injury from which he has failed to recover in time for the Pakistan series starting on December 13.

“Pollard will undergo rehabilitation work in Trinidad, under the supervision of CWI’s Chief Medical Officer, Dr Israel Dowlat, and will be reassessed in a few weeks ahead of the upcoming home tours against Ireland and England in January 2022,” Cricket West Indies said in a website statement.

Devon Thomas, a 32-year-old right-hander who played the last of his 21 ODIs eight years ago, has been added to the 50-over squad, while all-rounder Rovman Powell has been called up to the T20 side.

While Pooran led West Indies when West Indies beat Australia 4-1 in the Caribbean last July, Hope will be enjoying his first taste of captaincy.

He is West Indies’ leading ODI batsman, averaging nearly 53 from 83 matches with 10 hundreds – the last four of which have come inside the last two years.

The Pakistan series gets under way with the T20 Internationals, the first of which bowls off at 6 p.m. local time (9 a.m. Eastern Caribbean time).