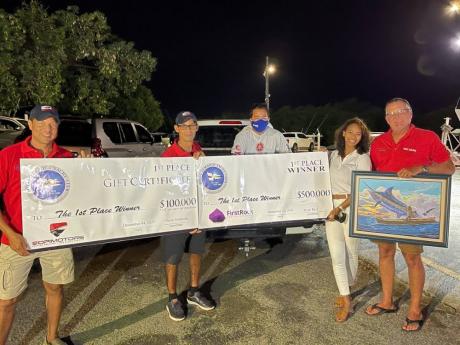 REEL MUSIC, captained by Gregory Mair, sang the sweetest tunes at the prize-giving ceremony, following their triumphant outing at the Royal Jamaica Yacht Club Fishing tournament held over the weekend.

Mair and his team, which included Peter Cowan and Michael Mair, swept most of the category awards during the one-day Calcutta-styled event, including the overall title and the first prize of $500,000.

Reel Music braved tough 15-knot winds and rough sea conditions and bettered the 14 other participating boats by landing the biggest barracudas, Wahoo and Kingfish, on the day.

Team Wassy was not to be outdone, as they claimed the category for the deepest line fish. Another boat, Big Wahoo, secured the prize for the sole tuna that was caught on the day.

The event, which was sponsored by First Rock Capital Holdings, First Rock Realty and Dollar Financial, saw 10 per cent of the pot going to the Port Royal Basic School, which will go towards much-needed renovations at the institution.

Brandon Samms, organiser of the event, says the tournament was a success, which signalled the return of fishing competition locally.

“We were very happy to have our first fishing tournament since February of this year and it was a success despite the weather being an issue. Everyone had fun and the spirits were up,” said Samms. “And with continued support, we look to have another one-day tournament, possibly in the spring and towards the back end of next year.”