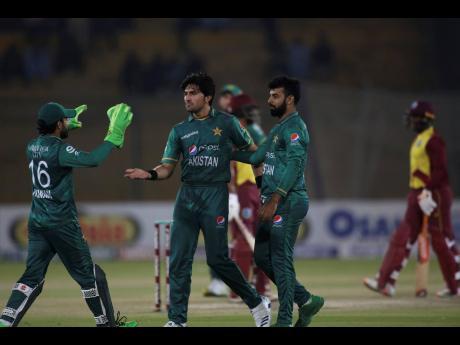 AP
Pakistan’s Mohammad Wasim (centre) celebrates with teammates after taking the wickets of West Indies’ Nicholas Pooran during the first Twenty20 international cricket match against the West Indies at the National Stadium in Karachi, Pakistan, yesterday.

WEST INDIES captain, Nicholas Pooran, said his team gave away more than enough runs in the field, which ultimately cost them, as they went down by 63 runs in the opening T20 International against Pakistan in Karachi yesterday.

The left-hander said his team will need to execute better, as they face the Pakistanis again today in the second match at the same venue.

“I think we gave away 20 runs more in the field and there were a few boundaries off the edges too. I loved the effort and energy from the guys tonight (Monday). We are a young side, but it all comes down to execution,” said Pooran.

With two debutants in Dominic Drakes and Shamarh Brooks to go with an already inexperienced unit, the Windies opted to bowl after winning the toss and, in the end, could only manage to restrict Pakistan to 200 for six.

The regional side got a good start with the ball, as left-arm spinner Akeal Hosein sent back captain Babar Azam for a duck with the fourth ball of the innings.

Things were looking even better in the fifth over when Romario Shepherd had Fakhar Zaman caught by Brooks for 10, with the score on 35.

That would be the only respite for the regional men for some time, as wicketkeeper batsman Mohammad Rizwan and Haider Ali took control with a 105-run third-wicket partnership.

Rizwan’s knock of 78 from 52 balls was laden with fours, with the right-hander hitting 10 of them at a strike rate of 150.

He would eventually fall to a good catch by Odean Smith off Shepherd.

Still, Zaman continued to play aggressively and blasted 68 from 39 balls, with six fours and four sixes.

He would become the sixth wicket to fall, with three balls remaining, as Mohammad Nawaz chipped in with a quick-fire 30 not out from 10 balls to close out the innings.

Shepherd ended with two for 43 from his four overs for the West Indies.

After Nicholas Pooran became the second wicket to fall for 18 in the fourth over with just 33 runs on the board, the regional side never really recovered and lost wickets with regularity. A brisk 24 from 16 balls from Smith, and 23 and 21, respectively, from Rovman Powell and Shepherd, showed a glimpse of the Windies potential ball-striking ability.

However, in the end, Mohammad Wasim and Shadab Khan, with four and three wickets, respectively, proved too good for the home side, who took a one-nil lead in the three-match series.