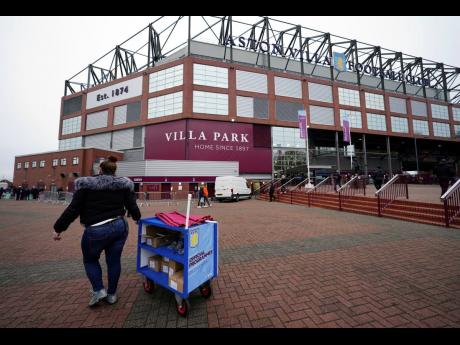 AP
A programme seller takes her stall back towards the stadium following the news that Aston Villa’s match against Burnley at Villa Park had been postponed, in Birmingham, England, Saturday, Dec 18, 2021.

THE ENGLISH Premier League lost another match to a COVID-19 outbreak in a squad when Aston Villa’s home game against Burnley was postponed about two hours before kick-off yesterday.

Villa said it did not have enough players to field a team following more positive tests in its squad that were reported early Saturday. The league approved Villa’s request to postpone the match “based on the number of COVID-19 cases, injuries and illness”.

Five matches scheduled for this weekend had already been called off because of coronavirus outbreaks in squads amid a worsening health emergency in Britain as the omicron variant spreads.

The league said the remaining four games – Leeds-Arsenal on Saturday and Newcastle-Manchester City, Wolverhampton-Chelsea and Tottenham-Liverpool on Sunday – “are currently scheduled to proceed as planned”.

The total number of games to have been postponed over the past week stands at 10. Only six games were called off in the whole of last season because of the coronavirus.

Burnley has had two games postponed on the day of the fixture in the last four days. Its home match against Watford was also called off a few hours before kick-off on Wednesday.

Many Burnley fans would have been travelling to Villa Park when the postponement was announced and Villa apologised for the inconvenience, saying the club “acted as swiftly as possible this morning to minimize disruption”.

“The results of PCR tests, which were taken yesterday prior to training as well as lateral flow tests, were received this morning,” Villa said in a statement, “and confirmed further depletion of our playing squad which was already impacted upon for our trip to Norwich in midweek.”

A break in play

Premier League managers will meet on Monday to discuss the COVID-19 situation, with some managers – such as Brentford’s Thomas Frank – advocating a break in play to reduce the outbreaks, and others saying the games should continue.

The league has already reintroduced emergency measures such as more frequent testing and wearing face masks indoors. Its board assesses applications to postpone matches on a case-by-case basis and “based on existing rules and COVID-19 postponement guidance issued to all clubs”.

In Europe’s other big soccer countries, there was minimal disturbance to the schedule.

All of the weekend’s Bundesliga and second-division games went ahead as planned in Germany, albeit with few or no fans attending. The country’s coronavirus-infection rate dropped again on Saturday, according to the latest registered figures from the Robert Koch Institute, continuing a gradual decrease over the last three weeks.

French Cup games were going ahead as planned, and Serie A games were taking place as scheduled with 75% capacity in stadiums.

The Spanish league was keeping games on despite an outbreak that has sidelined several Real Madrid players. Authorities have allowed soccer stadiums to be at full capacity since the end of September.