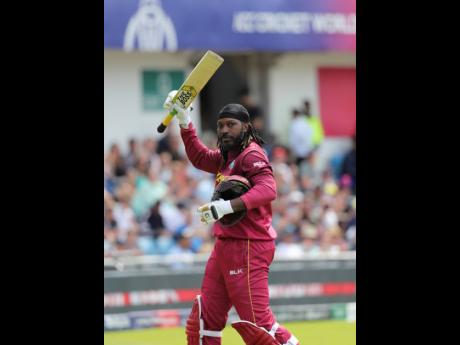 THE T20 International between the West Indies and Ireland on January 16 was being touted as the grand farewell for Jamaica and the West Indies’ most prolific T20 batsman, Christopher ‘Henry’ Gayle, however, that reality will not materialise.

The Gleaner has been reliably informed by sources that the ‘Universe Boss’ will not be picked in the West Indies squad to face the Irish in the lone T20 at Sabina Park at 4 p.m. on Sunday, January 16.

The cricket source, who spoke on condition of anonymity, said that pressure has been mounting from some past players who believe the gesture to select Gayle for the one-off T20 is not the right one since the same sentiments were not extended to players of the past, with the name of Shivnarine Chanderpaul being mentioned.

The source went on to add that the West Indies were looking to field their best team for the match against Ireland and that Gayle was not part of those plans.

The latest developments are expected to send shock waves throughout the region and the world as just recently, CWI CEO Johnny Grave said the lone T20 would be a “good opportunity” to say farewell to Gayle on his home ground.

Despite a well-below-par and disappointing performance at the ICC T20 World Cup in the United Arab Emirates, Gayle indicated that he would love to play one final match in West Indies colours before his home fans, and according to the source, that one last match might not be a full international.

“What I am hearing is that they want to give Gayle a testimonial match sometime in August when the New Zealand team comes to the Caribbean for a tour as part of the Jamaica 60th Anniversary celebrations.”

The latest development has delayed the naming of the West Indies ODI and T20 squads for the upcoming series against Ireland, which runs from January 8 to 16. The Ireland squad is expected to fly into Kingston from Fort Lauderdale, Florida, on Friday December 30.

In the meantime, the Government of Jamaica has decided to do an about-turn on the decision to allow 2,000 vaccinated spectators to attend the matches between the West Indies and Ireland.

Minister of Local Government and Rural Development Hon Desmond McKenzie made the announcement on Wednesday that no spectators would be allowed at the upcoming cricket and schoolboy football matches slated for early January.

According to the minister, the rising positivity rate and the threat of the Omicron variant has made it impossible to “give the green light” for public access to these games.