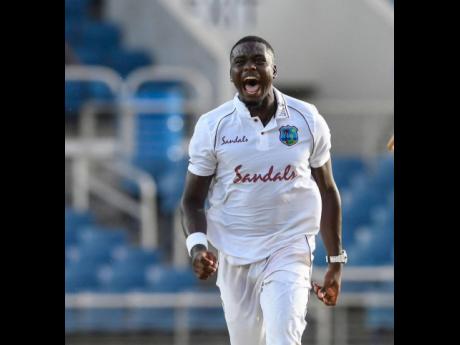 Young West Indies fast bowler Jayden Seales could not hold back the smile when asked if he would relish the opportunity to make his One-Day International debut against Ireland at Sabina Park this Saturday. The last time Seales played at Sabina Park...

Young West Indies fast bowler Jayden Seales could not hold back the smile when asked if he would relish the opportunity to make his One-Day International debut against Ireland at Sabina Park this Saturday.

The last time Seales played at Sabina Park, he took three wickets in the first innings of the second Test against Pakistan in August last year, and the Trinidadian is relishing the opportunity to bowl on the seam-friendly track, this time in coloured clothing. Earlier, Seales produced a player-of-the-match performance in the first Test, picking up three for 70 in the first innings and then five for 55 in the second.

“As a fast bowler, you always want to get out there on a good cricket pitch and bowl well for the team and get wickets. Playing somewhere where you are comfortable and confident and have success is always a good feeling,” said Seales.

Seales will be vying for one of the fast-bowling spots in the final eleven with competition coming from Alzarri Joseph, Odean Smith, Romario Shepherd, and Jason Holder.

After watching Jamaican fast bowler Nicholson Gordon pick up five wickets in a limited-overs practice game on Wednesday, Seales says he would love to get another opportunity to play on what is now one of his favourite grounds.

“Being back in Jamaica at Sabina Park gives me the confidence. Once given the opportunity, I want to repay the faith that the selectors have in me.”

The 20-year-old pacer, who burst on to the international arena in 2021 with tremendous success, is a rookie in the limited-overs format, with just three List A games under his belt for Trinidad & Tobago.

The former West Indies Under-19 pacer has had a meteoric rise in international cricket, with the right-arm speedster just returning from a stint in the Lankan Premier League, where he picked up 15 wickets in seven matches.

With veteran fast bowlers Suranga Lakmal and Wahab Raiz to draw experience from, Seales says he is hoping to impart some of that knowledge he gained in the upcoming series against Ireland.

“For me, I tend to set realistic goals. I am not one to say that I will get a dream debut and get five wickets. What I look forward to is keeping things as simple as possible. If I get to play and get three wickets or two wickets in a winning contribution, I will be very pleased with that.”