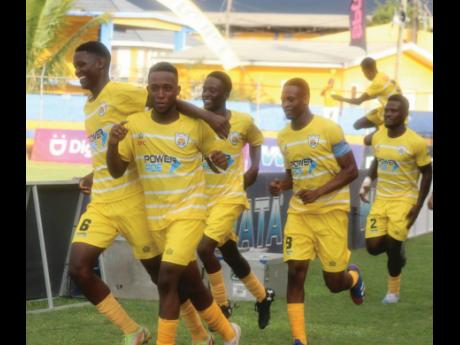 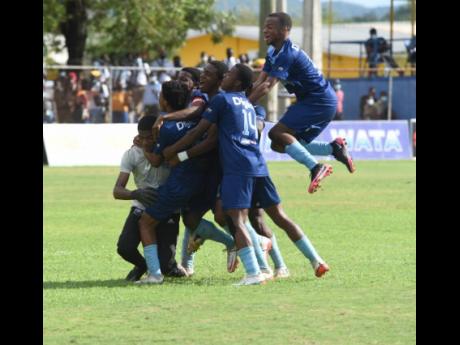 Ashley Anguin/Photographer
The Manning’s School goal keeper Mikhail Romans (left) is swarmed by his teammates after his heroics help them defeat Dinthill Technical High School in an ISSA daCosta Cup semi-final penalty shootout at the STETHS Sports Complex on Wednesday January 12, 2022. Manning’s won the shootout 4-2 after a 1-1 regular time draw.
1
2

FOR YET another season, obvious title contenders Dinthill Technical High School have flattered to deceive as they were sent packing at the semi-final stage of the ISSA daCosta Cup.

The Linstead-based school could not repeat Saturday’s penalty shoot-out success after they were beaten 4-2 on penalties by The Manning’s School. The teams had earlier played to a 1-1 regulation-time scoreline.

Manning’s will meet Garvey Maceo, who had a 3-2 victory over defending champions Clarendon College (CC) in the final.

Coach of Manning’s made a tactical change, injecting backup goalkeeper Mikhail Romans for the penalty shoot-out, which proved a stroke of genius.

Romans got a hand to the first kick but couldn’t keep it out. He went the right way for the second, which rattled the bar for a miss. He couldn’t stop the confident Jahiem Thomas but came up big to save Dinthill’s fourth penalty kick and take his team to their first daCosta Cup final.

In regulation time, Dinthill had four good chances to take the lead in the first half but were wasteful in front of goal. They were made to pay 10 minutes into the second half when Jahmaleek Porter gave Mannings the lead.

The Westmoreland-based school tried to hold the lead, but Dinthill’s leading goalscorer, Shamair Hutchinson, pulled the score level in the 83rd minute.

Coach of Dinthill Oniel Thomas said his boys were not wearing their shooting boots today, which cost them dearly. He is hoping they can get things right for the Champions Cup final on Saturday.

“Yes, it’s very disappointing. We created a lot of chances and didn’t capitalise on them. That’s what always happens when you get chances and don’t score – you end up on the losing end,” Thomas said.

“It’s just complacency creep in. We were too casual. As you see, a lot of goals went begging, and we should have done much better,” he added.

Tomlinson, who thanked the past students and school for their preparation, applauded his boys’ approach and discipline in the game.

“We had an objective and we came out to play quality football. We knew the conditions would have affected us, so we ensured that we were fully prepared. The boys approached this game very well. In the end, we were getting a bit tired but maintained our discipline and made sure we held on,” Tomlinson said.

“The switch of the goalkeeper and the arrangement of our penalty was key. A lot of people following football would say that Deno Wallace kick away some vital penalties in the past, but I was confident, and they practised. We knew the goalkeeper that we put in was able to save one or two,” he added.

Later in the afternoon, Clarendon found themselves two goals down after 46 minutes of football but still managed to claw their way back into the game against Garvey Maceo, making for a frenetic finish by its end.

The more fancied Clarendon suffered from a defensive error on the stroke of half-time, and Gregory Cousins (45+1) made them pay.

Things got worse for CC at the beginning of the second half after Cleo Clarke slammed home a grounder in the 46th minute to leave the defending champions two goals down.

But CC would come roaring back, with a Jaheim Rose penalty in the 51st minute. Clarke would return to hurt CC again, though, putting away an 80th-minute penalty with aplomb. But the defending champions would not die as a Damion Abrahams corner went in with five minutes left in regular time.