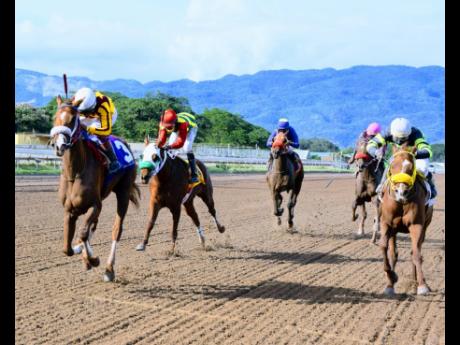 Anthony Minott
ONE DON (right), with Dane Dawkins aboard, placing second to AWESOME CHOICE (left), ridden by Anthony Thomas, in a 1200 metres event at Caymanas Park on January 16, 2021.

GARY Subratie, who started last Saturday’s 10-race card with a whopping hat-trick, including meet-opening 21-1 outsider, T BRADY, should land tomorrow’s restricted overnight allowance with United States-bred ONE DON after being beaten in a similar event by GO DEH GIRL on December 19.

Restricted to horses who have never won an overnight allowance, the six-furlong event is ideal for run-on sprinter ONE DON who, prior to being beaten by GO DEH GIRL, lost by only a half-length to down-in-class GOD OF LOVE in open overnight-allowance company, a group higher than Sunday’s assignment.

LET HIM FLY aside, there is no real speed in the event to get away from ONE DON.

Phillip Lee claimed middle-distance specialist LET HIM FLY for $1 million off Clifford Atkinson Jr on November 27, opting to try his hand with the five-year-old, who graduated from non-winners-of-four late October before Anthony Nunes sacrificed him on a $750,000 tag in defence of his trainers’ title.

Though he ran over non-winners-of-four with relative ease and was almost money-back against $750,000 claimers, those races were at seven and a half furlongs, run at pace he could comfortably stalk and bid off the home turn, winning both in almost the exact time.

ONE DON isn’t always the sharpest from the gate but has eight runs in overnight-allowance company under his girth against some hot-steppers, finishing outside the frame only once.

A major plus for ONE DON is in-form rider Robert Halledeen going up against lightweight Ramon Nepare aboard LET HIM FLY, Lee’s attempt to maximise the claiming rider’s nine-pound claim by employing front-running tactics.

Though he might be getting 15lb from ONE DON, due to Nepare’s claim, LET HIM FLY doesn’t have the speed to slip the field nor will his rider win a stretch battle with Halledeen, who closed the last quarter of the season with 28 victories.