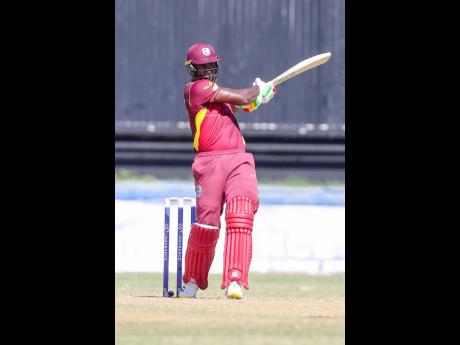 All-rounder Romario Shepherd is hoping that the West Indies team can find their footing once again and come up with a victory in the third and final One-Day International (ODI) against Ireland at Sabina Park tomorrow.

Shepherd was one of the standout performers for the regional side in Thursday’s second ODI. He scored his maiden half-century but West Indies lost the match and need to win tomorrow to claim the series 2-1.

The West Indies had to claw their way to 229 all out in 48 overs with Shepherd making an even 50 and Odean Smith chipping in with 46, as the pair shared in a 58-run ninth- wicket stand.

Shamarh Brooks followed up his first match 93 with 43. With the second half of the innings reduced to 36 overs due to rain, Ireland had a revised Duckworth-Lewis target of 168 to chase and they eventually got the runs in 32.3 overs thanks to an unbeaten 54 from Harry Tector and 35 from player of the match Andy McBrine.

Shepherd hit seven fours in just his fifth One-Day Innings batting at number nine, and for the Guyanese the key is to remain focused with the series and 10 valuable World Cup Championship points up for grabs.

“The aim is not to get too comfortable with one performance. I have a foundation but the key is to repeat the good things that I did in the last game, whether it be bowling or batting,” said Shepherd.

For the second time running, the West Indies batsmen have failed to negotiate the Irish bowlers in the first 20 overs of the contest. In match one, the hosts were 62 for four in the 19th over and in game two, the Windies were struggling at 43 for three in the 14th over.

For captain Kieron Pollard, the batting needs to click on all cylinders if the home side is to come away with a victory tomorrow.

“Personally, as a batter, we need to find a way out. We need to take stock and don’t put up excuses. Special mention to Odean Smith and Romario Shepherd, they showed amazing hunger. We need to put the pieces of the puzzle together as far as the batting is concerned. All to play for on Sunday,” said Pollard.