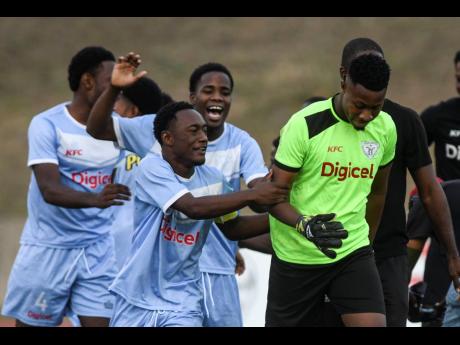 St Catherine High are on track to win their second successive ISSA Walker Cup KO title after beating Excelsior High 2-1 on penalties in a semi-final match at the Stadium East field yesterday. However, standing in their way are the Craig Butler-coached Mona High who slammed Kingston Technical 5-0 in the other semi-final.

In the feature game, Excelsior led through Jevaughnie Simms’ 36th-minute goal but Nickyle Ellis equalised just before the break. St Catherine then got very good opportunities to grab the win in the second half but they failed to capitalise on their chances.

Both teams then missed their first three penalties in the shoot-out before Ellis and Jevin Parkinson converted to snatch the victory for the Spanish Town-based St Catherine High. St Catherine’s coach, Anthony Patrick, said the aim is to win historic back-to-back titles.

“It would be good to be back-to-back champions. In 2019, we reached our first final and won it and now we are here defending it again. It’s a good feeling and we want to see if we can defend it,” he said.

He added that he thought they created enough chances to win the match in regulation time.

“We should have put away the chances. We didn’t have a brilliant game but we created enough chances to put away the game,” he added

Earlier, Mona made light work of Kingston Technical with Romario Thomas leading the way with two great strikes. Thomas put Mona ahead after 27 minutes with a strike from the edge of the box. And two minutes before the break, he beat goalkeeper Kerron Grant with another long-range shot from 25 yards.

Six minutes after the break, Robino Gordon made it 3-0 before Keneldo Brown made it 4-0 after 54 minutes and Damoi Whitfield sealed the win in the 73rd minute.

Mona coach Craig Butler said his team wanted to make amends for their Manning Cup exit with a standout performance.

“We know what it felt like to bow out of the Manning Cup, losing out to St Andrew Technical on goal difference. We should have been beating all the schools 5-0 from the beginning of the competition, as we created the most chances and played the most attacking football but we just weren’t finishing,” he said.

“So they took it seriously and put their chances away in this game. Today, we got the five goals and now we look to go into the final and give the school its first schoolboy trophy,” he said.

Butler who is in his first season with the school, added that it is an honour to reach the final.

“It is an honour for the school, a real good thing, and it’s an honour for me as well. But I am focused on the development of Jamaica’s football, utilising Mona as an example for other schools, players and the national team. We believe we can win, with God, effort and belief from the boys but we must remain humble,” he said.