Patriarch too good for God Of Love 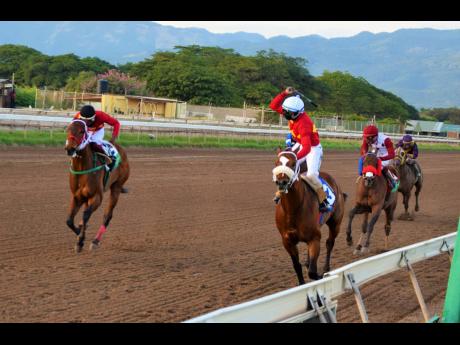 PATRIARCH, under a patient ride from star-of-the-day Dane Dawkins, fought off stablemate GOD OF LOVE to seal an exacta for trainer Fitzgerald Richards in the St Catherine Cup at six furlongs yesterday.

Speedy PATRIARCH took over from GOD OF LOVE shortly after the start but was held together on the lead by Dawkins, who finished brilliantly to secure a fourth win on the 10-race card.

PATRIARCH came off the home turn with GOD OF LOVE challenging on his outside and EAGLE ONE attacking as a team along the rail. GOD OF LOVE pulled level a furlong out but topweight 126lb took its toll, allowing PATRIARCH to find a third gear, rallying for a three-quarter length victory.

Dawkins, who recently returned to the saddle from an exercise spill, denied jock-of-the-moment Robert Halledeen a three-timer astride GOD OF LOVE, after booting home three winners himself – ATOMICA in the second event and a quick double aboard MISTER A and JORDON REIGN’S in the sixth and seventh, respectively.

Dawkins made an auspicious bid for a five-timer in the day’s closing event, attacking HEART OF THE SEA relentlessly with BRIDAL BLUSH from the top of the straight but Javaniel Patterson kept the speedy filly going strong in the six-furlong event.

Halledeen won the first two events on the programme, PIP and SILENT CAT, to maintain the form which won him a place in champion trainer Anthony Nunes’ barn at the back end of the season.

Racing continues this afternoon with a 10-race card.