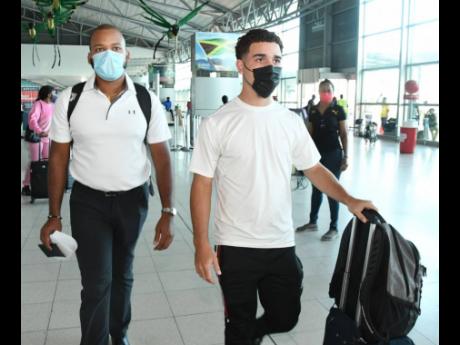 Golfers Justin Burrowes and William Knibbs left the island on Monday for the Dominican Republic where the pair will represent the country at the seventh edition of the Latin America Amateur Golf Championship.

Burrowes will be making his third appearance, while Knibbs will play in his second championship at Casa De Campo Resort.

The Jamaicans will be competing against 25 other nations, with representatives from South and Central America and the Caribbean.

For Burrowes, he will be looking to better his 2020 finish, where he was tied for 42nd place.

“I am definitely going to give my best shot. I feel prepared physically and mentally and it is just to go out there and execute,” said Burrowes.

Burrowes who is ranked 825 in the world, says he has been preparing well and should give a good account of himself in the Dominican Republic.

“I am fresh off a tournament and feeling really confident about my game. I have been playing a lot of golf and I feel I have that competitive sharpness and hopefully, we can see some of that this week,” added Burrowes.

In the meantime, Knibbs who is ranked 3205, says he has improved tremendously since the last time he played in the tournament, and he is looking forward to bettering his 58th-place finish the last time out.

Knibbs says he is oozing with confidence, having just this week shot his personal best score of 63 at the Caymanas Golf Course.

“I am a much better player from two years ago where I barely missed the cut. I am expecting to make the cut this time and be in contention should I execute correctly, because my game is at the right place both mentally and physically.”

The championship starts on Thursday and ends next Sunday.