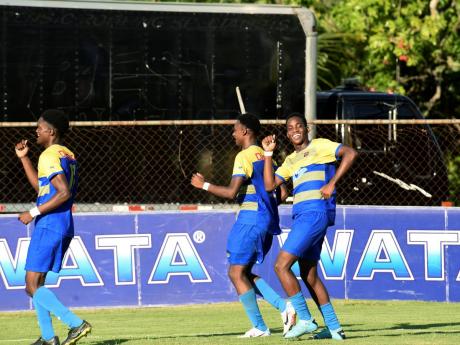 For two teams that have never won a senior schoolboy football title, the motivation is high for Manchester High and Edwin Allen High to go after the Ben Francis KO Cup. The two schools will clash in the first game of today’s semi-final doubleheader at the St Elizabeth Technical High (STETHS) Sports Complex in Santa Cruz. Kick-off time is 1 p.m.

Vassell Reynolds, coach of Manchester, said the opportunity for his boys to become part of history for the school is enough motivation for them.

“We are trying to create history as Manchester have never won a major title, so we have to use that as a motivating tool. The boys recognise that, and they have been very resilient throughout the season. Through thick and thin, they have put in the work and now have an opportunity to reap the rewards. As a result of that, I know the team will give a good account of themselves and come out with a result,” said Reynolds.

“Edwin Allen are a tough team. Right throughout the season people felt they were one of the teams to beat. I personally know the team and the set-up there, so I know it’s going to be very difficult. However, we have confidence in our ability,” he added.Edwin Allen’s coach, Tafari Burton, said the dream of lifting the cup is held by everyone involved with the team, so the motivation is always there.

“The school has never won a title at this level, so we are motivated. Self-motivation is one, but we also have to get them in the frame of mind. A game like this is more mental than anything else. It would be unanimous for the players, school, the community, and everyone involved to get to the final and even to go on to win,” Burton said.

“We can’t take anything for granted. This is a semi-final, and if a team wasn’t good, they wouldn’t reach that stage. We will be approaching the game for what it is: a knockout with your backs against the wall. We know Vassell Reynolds is a good coach that always has something up his sleeve, so I have to try and outcoach him and for my players to outplay his players as well,” he added.

Manchester will go into the game with the better record as they have lost only one game this season. They have an impressive defensive record, having conceded only four goals. Edwin Allen, on the other hand, have conceded 11. Offensively, both teams have an almost identical record. Manchester have scored 33 goals, two more than Edwin Allen.

In the late kick-off at 3 p.m., six-time champions STETHS will be looking to register another win over Frome Technical this season and book a spot in the final. Both teams clashed at the quarterfinal stage of the daCosta Cup just before the Christmas break four weeks ago, where STETHS ran away 6-0 winners in a match they needed to win by a huge margin to qualify for the semi-finals of that competition.