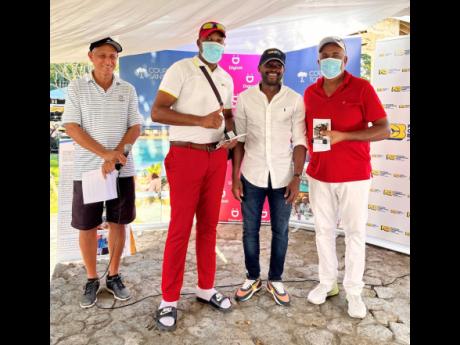 Mark Newnham and Jodie Barrow were gross-score runners-up at the two-man scramble last staged in January 2020, its main charity being the Three Hills Primary School in St Mary, a perennial beneficiary of Couples’ anniversary golf tournaments.

Avid golfer Glenn Lawrence, chief executive officer of Couples Resorts, expressed delight at the turnout, saying the tournament not only exceeded participation expectations, but raised $300,000 over par, as $2 million was targeted.

“We are at $2.3 million,” noted Lawrence, adding that the funds raised will go towards a classroom project at Three Hills Primary.

“We converted a container at the school into a state-of-the-art computer lab with 10 new computers, at an approximate cost of $3.7 million, through funds raised from the golf tournament.

“The next phase is to convert a patio at the front of the computer lab into a fully furnished classroom,” Lawrence added.

Evatt Bloomfield scored the first hole in one in the tournament’s history, aceing par-three hole 11.

“It was my first-ever hole in one, more than 25 years playing. I hope it won’t be my last,” he said.

Jeffery Brown of sponsor National Commercial Bank said his organisation was happy to be involved in a partnership with a cause.

Co-sponsor Digicel’s Elon Parkinson added that the telecoms company was always happy to contribute to a cause and have golfers “break out of pandemic hibernation”.

Alexandra Ghisays, organiser and Couples executive, said she was relieved that the tournament had resumed and was looking forward to hosting the Negril leg in October.