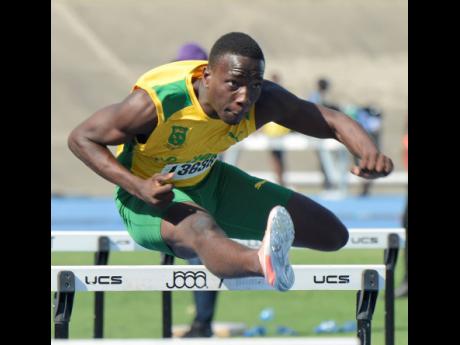 One of the smartest performances at the recent Jamaica College (JC) Invitational came from outgoing St Jago High senior Jahvel Granville in the Class One 110 metres hurdles. Granville travelled the distance in 14.07 seconds. It was the start to a season in which he hopes to attract a college scholarship.

Granville stepped to his blocks as a pesky headwind died down at JC’s super Ashenheim Stadium and led from start to finish. When the season-opening deed was done, Granville rated the run as “good”.

“It was a good race. I wanted a better time, but it’s the first race of the season, so I can’t complain,” the St Jago student said.

Asked to stipulate his targets for 2022, the St Jago senior was crystal clear. “It’s my last year, so I’m expecting to move on to college. I just want to get some good times in so I can make the transition on to college,” he resolved.

The performance at JC represented a fine comeback for an athlete who made history at the ISSA/GraceKennedy Boys and Girls’ Championships five years ago. In 2017, he became the first boy to break 13 seconds in the Class Three 100 metres hurdles with a gold medal-winning time of 12.90 seconds. He followed that up with silver medals in Class Two, both in 2018 and 2019, behind his St Jago teammate, Vashaun Vascianna.

With the COVID-19 pandemic wiping Champs 2020 off the calendar, Granville is down to his last chance to win another gold in the greatest high school meet in the world. Now a smidge taller than in 2017, the compact hurdler doesn’t show any signs of anxiety. Instead, he is delighted to have his spikes on again. “It feels great. Two years out. I’ve got to give God thanks because it could have been worse. Feels really great”, said the former St Jago Manning Cup football captain.

He and his coach, Maurice Broadbell, are taking a patient approach to the season. As such, the race at JC was simply a test. “Knowing that I was out for two years, he just told me to just come out here to see where I’m really at, and we work from there,” summarised the 2018 Carifta Under-17 runner-up.

Just 18, Granville could emulate his old teammate, Vascianna, who won a silver medal at the World Under-20 Championships in Nairobi, Kenya. This year’s renewal will be held in Cali, Colombia, early in August.