Fans shut out for Mexico and Costa Rica home games 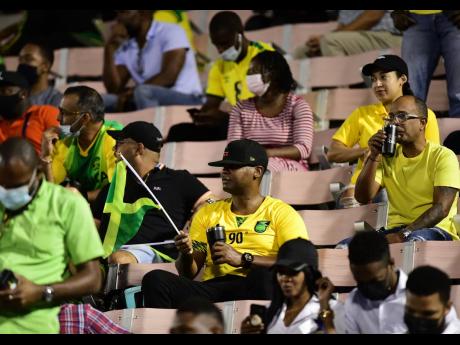 Gladstone Taylor
Jamaican football supporters in the stands on the November 16 Concacaf World Cup qualifying game between Jamaica and the United States at the National Stadium in Kingston.

JAMAICA WILL have to continue their World Cup qualifying campaign without home support, at least for the immediate future.

The Jamaica Football Federation confirmed that the upcoming home World Cup qualifiers will be played behind closed doors for the January/February window consisting of the January 27 game against Mexico and the February 2 game against Costa Rica.

The return to home games behind closed doors comes in the midst of Jamaica’s recent COVID-19 surge which has seen the daily number of cases to be in excess of a thousand and the positivity rate reported at being 51.5% as of Monday.

Despite rave reviews from the local authorities regarding the November 16 game where fans made their return to the National Stadium against the United States, JFF vice-president, Raymond Anderson, said that the current conditions forced the hand of the approving bodies to refuse the request for 5,000 fans to attend.

“When we met with the agencies, they saw it differently. They are saying that it is unwise at this time,” Anderson told The Gleaner.

“We have to respect and understand that safety comes first,” he said.

JFF general secretary, Dalton Wint, had hinted over the weekend that it would have been unlikely to have accommodated fans at any rate because of the reduced timeline to process and approve the fully vaccinated patrons.

“Even if the number is reduced, it is the timeline to get people into the stands because you need enough time for verification and the other things that are required,” Wint had told The Gleaner. “It might reach a point where it makes no sense.”

The decision continues the trend of selected sporting events without spectators as the request for fan attendance for the latter stages of the schoolboy football season, as well as international cricket matches during Ireland’s tour of the West Indies, were also denied.

While not giving specifics, Anderson said that the decision will put the federation at a financial disadvantage as they were counting on the gate receipts to ease the monetary strain on the organisation, which has already spent over $100 million during the campaign.

Additionally, he said that there were no considerations on reducing the requested number to change the mind of the local authorities.

“If we decided to go with, let’s say 2,000, yes, it would be because you want to have at least that number of fans, and in hindsight, it would be great. But nobody did suggest that we could go lower,” Anderson said.

“You don’t want to go less because if you do go less we would just end up with a loss because the expense would really overrun the income. So that 5,000 was just like a breaking point where you would make a little profit, so to speak.”

Medical practitioner Dr Wykeham McNeill said that there has to be uniformity regarding the process of approving large gatherings, given the current situation.

“I think that the policy has to be straight up. And there are things you have to look at. Right now we are in a surge so because of that everyone is being very careful,” McNeill said.