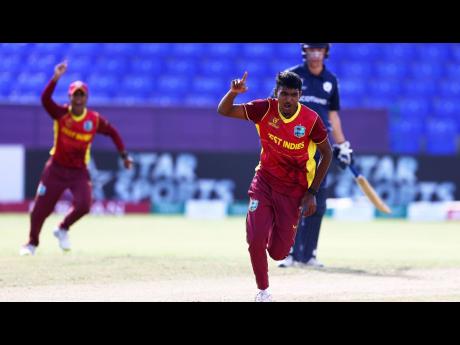 STAND-IN CAPTAIN Giovante Depeiza says West Indies Under-19s still need to make critical improvements if they are to go deep into the ICC Under-19 World Cup.

The home side rebounded from their loss to Australia Under-19s last Friday to trounce Scotland Under-19s by seven wickets here on Monday but Depeiza said greater efficiency in the key areas of batting and bowling was required.

“I’m very happy. It was a great all-round performance. We can still improve on the small things going into the next game but it was a good job,” said Depeiza, who was standing in for the ill Ackeem Auguste.

“The extras – I feel there were too many extras. The wickets we lost when chasing a small total, I feel we should be without loss to send a message.

“It was a great victory. A low total so the bowlers are going well. It is just [improving the] batting up top, then we can go well in the next game.”

The home side bundled out the Scots for a paltry 95 in the 36th over with fast bowler Shiva Sankar grabbing three for 17 to earn Man-of-the-Match honours. Left-arm spinner Anderson Mahase chipped in with a very handy 2-16 and off-spinner Onaje Amory ended with 2-26.

Sankar grabbed the first three wickets to fall, reducing Scotland to 29 for three in the ninth over, a position from which the innings never recovered.

“I’m just really happy with my performance today. I think that the wicket had a bit of bounce and the ball was swinging, so I was just happy to get a good start for the team,” he said.

“I think that all of the players did really well in the field, with some crucial catches so I am just really happy.

“I think we bowl in partnerships really well. We have a good bunch of guys here, we feed off each other, it was really great.”

He added: “Coming from a loss, I think that is a great performance there, so it is just about building and continuing and I’m just really happy with the performance today and the win.”