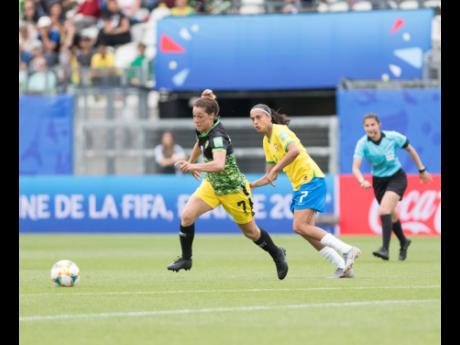 Gladstone Taylor
Jamaica’s Chinyelu Asher dribbles while being chased by Brazil’s Andressa Alves Da Silva during the FIFA Women’s World Cup in 2019 at the Stade des Alpes in Grenoble, France.

NATIONAL MIDFIELDER Chinyelu Asher will be making her return to Europe for the upcoming season, joining Swedish outfit AIK Fotboll.

Asher, 28, put pen to paper on a one-year contract with the club, departing National Women’s Soccer League (NWSL) franchise Washington Spirit of the United States after their 2021 title-winning campaign. The deal was announced yesterday.

Asher last played in Europe three years ago with Norweigian club Stabæk but only made nine appearances during her time there. Asher made only two appearances for the Spirit last season during the team’s title run.

Manager Anne Mäkinen said that Asher’s experience and versatility will be a great asset for a team that finished 10th place last season in the Damallsvenskan, the country’s top-tier women’s league.

“Chinyelu is a dynamic player who can play in several different positions and contribute to the flexibility we want in our way of playing. She also stands for lots of routine and experience that we need to continue to develop the team in the Damallsvenskan,” Mäkinen told the club website.

Asher said that she was enticed by playing in the country ranked second in the world according to the latest FIFA ranking, and is ready to help improve the fortunes of the team.

“This will be my very first time in Sweden and I will say the level of women’s football in this country, as we saw demonstrated in the World Cup and most recently the Olympics, played a big part in attracting me to come and compete,” Asher told the club website. “I am super excited to be a part of a club which such rich history in Swedish football. I’ve heard so many good things about the programme and the direction it’s going, and I hope to play a positive role in this upcoming season.”

National defender Konya Plummer is the other Reggae Girl to have played for AIK, when she made six appearances during her loan stint from NWSL club Orlando Price last year.

Asher last played for the Reggae Girlz last June during an international friendly against Nigeria.