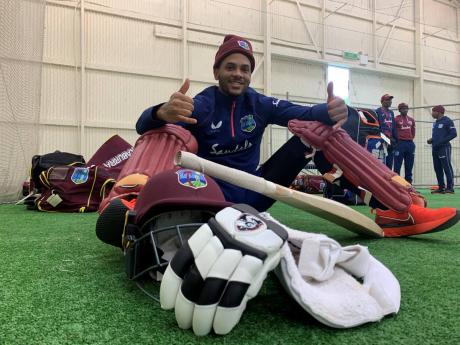 JAMAICA AND West Indies batsman Brandon King is eagerly awaiting the start of the series between the regional side and England, having missed out on the opportunity to play in the lone T20 against Ireland on his home ground, Sabina Park.

Due to COVID-related issues, the West Indies-Ireland series was reduced to only the three One-Day Internationals, with the T20 match scrapped to facilitate the completion of the ODI series.

While disappointed that he didn’t get to play at his actual club ground, the right-handed King, who recently made his way successfully back into the West Indies team, is keen to continue his good showing with the bat, similar to what he did in Pakistan late last year.

Despite coming out on the losing end, King topped the batting in the Pakistan series with 111 runs in the three matches with a top score of 67.

According to the Kingston Cricket Club player, the constant work on the mental side of his game is finally bearing fruit, with more success to come.

“I’ve been working on the mental side of my game and how to approach each inning. I didn’t work on anything specific, but I was very motivated, because being out of the team was tough, especially since I feel I have the ability to be a world-class player,” said King.

King said he has been putting in the work with the Jamaica Scorpions franchise, knowing that another opportunity in the senior set-up was on the horizon.

“I took a deeper look at my batting and we identified some trends, one of those trends was that I was not rotating the strike enough, so we worked at that for months.”

With five T20s against England to come, King is hoping to put his skills to the test against another formidable attack, and the aim is to be more consistent to cement his place in the West Indies team.

“I need to continue performing. It’s simple as that. It’s not always going to be easy, but I want to put more value on my wicket. Adjusting to the international game comes with consistent opportunity and experience. Teams have specific plans for you and they are always looking to set you up, so you have to be aware and counter that.

“My goals haven’t changed much, I want to continue performing well and maintain my place in the team. Once I can do that, it may lead to consideration for other formats of the game, as I believe I’m more than a T20 player,” added King.