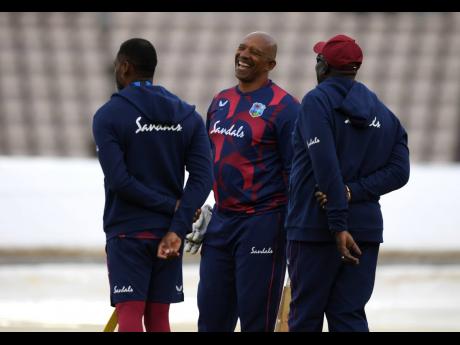 Mike Hewitt
In this file photo, West Indies team coach Phil Simmons (centre) shares a laugh with members of his support staff before the start of the first Test match between England and the West Indies at the Ageas Bowl in Southampton, England, last year.

Phil Simmons is not worried about his job as West Indies head coach, despite the team’s recent losses.

On the heels of the side’s 2-1 shock loss to minnows Ireland in their One-Day International (ODI) series that ended on Sunday in Karachi, Simmons said he was focused on seeing the players improve, and not about whether he could lose his pick.

“If I start worrying about my job then I have problems. I am worrying about the success of the team, I am worrying about how we get players to play their roles, and in playing their roles get the team to be successful, and that’s all I’m concerned about,” he said as he spoke to the media on Tuesday ahead of Saturday’s start of the five-match Betway International Series against England.

“You’re always under pressure as a coach, or coaches, when the team’s not doing well, in any sport you play. And when the team is doing well the coaches are forgotten, but that’s the nature of the job.”

Simmons, who was reappointed in October 2019, oversaw the West Indies’ failed title defence at the 2021 ICC T20 World Cup and the 3-0 defeat by Pakistan in the T20 series at home.

Asked how he motivated himself as a coach in light of the repeated losses, he said he continued to enjoy his job as head coach.

“My love for coaching and love for the players and their improvement carry me a long way every day,” the former West Indies all-rounder said.

“Everything is being done on the other side of the rope to help them to be ready for the game,” Simmons added.