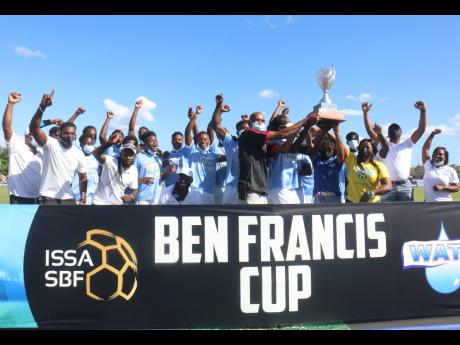 Edwin Allen High School lifted their first-ever title in schoolboy football when they defeated St Elizabeth Technical (STETHS) 3-2 in a thrilling Ben Francis Cup KO final at the STETHS Sports Complex in Santa Cruz yesterday. Tafari Burton, coach of Edwin Allen, said both himself and the team were overjoyed.

“We are just excited. Someone told me two days ago that the feeling you get when you win is like true love. Trust me, if this is how true love feels, I always want to win,” said Burton who added that they are inspired by the girls’ track and field team who are many-time champions at the ISSA Girls’ Championships.

STETHS led at the half-time interval courtesy of a 16th-minute strike by Negus Daley. However, Edwin Allen came storming back after the break when Alwayne Bryan found the equaliser just two minutes in before Jahiem Harris gave them the lead for the first time in the 63rd minute.

The Clarendon-based school tried to hold on to the lead but STETHS showed fight in their backyard with Davin Wright levelling the scores in the 85th minute. Edwin Allen responded four minutes later with a goal worthy of the trophy off the left boot of Harris for his brace.

Burton added: “Who could ask for a better win or a better game for a Ben Francis final. I have to give credit to STETHS who made the game exciting. They stepped up on us but we stood strong. One of the things I like about my team is the guts we show right through the competition.”

“Yes, it is disappointing because we really wanted a trophy this season. I really feel it for this crop of players because I have a close attachment with these players,” Wedderburn said.