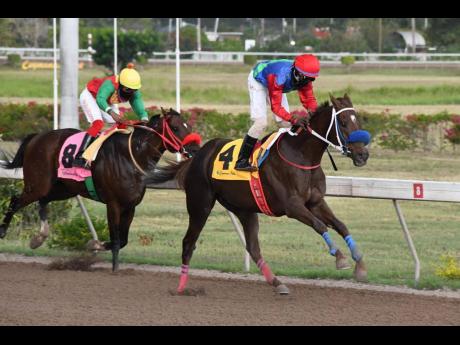 DOUBLE CROWN outstayed a game RAS EMANUEL at a mile to score a third overnight-allowance win within a year yesterday, clocking a slow 1:41.3 against inferior opposition, including over-the-hill SUPREME SOUL, the 2019 Triple Crown winner.

Last raced November 27, placing a creditable eighth, up in class among open-allowance runners, down-in-class DOUBLE CROWN broke sharply with Dane Dawkins before being taken on by speedier RAS EMANUEL, who tried to steal a march on his seven rivals.

Racing clear three furlongs out, while DOUBLE CROWN appeared to struggle, overtaken by 38-1 outsider GAMBLER, RAS EMANUEL came off the home turn full of running, but was always suspect at the trip, made worse by being declared without a whip.

Claiming jockey Youville Pinnock tried his best to keep RAS EMANUEL going in the stretch run. However, the 10-year-old sprinter, having hardly ever performed well beyond six furlongs, surrendered to DOUBLE CROWN’s rally a half-furlong out.

Dawkins’ victory aboard the overwhelming 1-2 favourite took his tally to eight wins, tying Robert Halledeen atop the jockeys’ standings.

Halledeen had earlier landed the fourth event astride Anthony Nunes’ CURLIN’S AFFAIR, guiding the four-year-old to a hat-trick of wins, splitting DADDY JONES and CLASSICAL ORB, coming off the home turn at nine furlongs and 25 yards.

Racing is scheduled to resume at the weekend with a Saturday-Sunday meet. However, some trainers, with the blessing of the Jamaica Racehorse Owners Association, have threatened to withhold nominations after turning down Supreme Ventures Racing and Entertainment Limited’s offer of an improvement in appearance fees, as opposed to the $70 million purse increase requested of the loss-making promoting company.