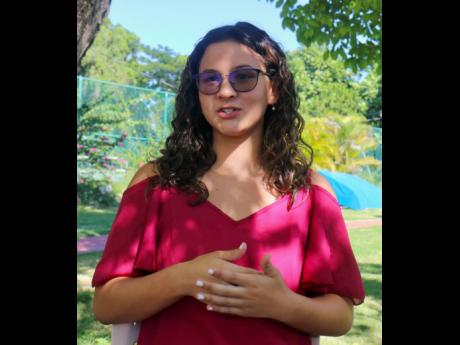 LEAH CHIN did not choose to be a swimmer initially, but after the gymnast was injured, her talent-infused DNA helped the 13-year-old pivot and within six months of swimming competitively, the Montegonian is already breaking records.

Her progress has come as a surprise, owing to the lack of resources for swimmers in Montego Bay. Cries for a championship pool over the years, have fallen on deaf ears, but Chin has no plans of giving up. She trains twice per day, every day.

“We don’t even have access to 25-metre pool. It’s quite hard actually. We have been jumping back and forth between different small pools, just anywhere we can find. Training at the beach and at the Sea Gardens Hotel pool,” is how Chin and 10 other swimmers from the camp she is enrolled in have been surviving.

“I have just been going back and forth, trying to make it work.”

Chin said she had to flip around seven times in a 12 metre pool at a villa that assisted the team she swims with, just so they could do 100 metres.

Had it not been for the kindness of the operators of entities such as the world-famous Doctor’s Cave Beach, she wouldn’t be competing so competitively.

There are not many swimmers in western Jamaica, and the Mt. Alvernia High School student has ambitions of breaking the mould, representing her country and eventually making it to the Olympics.

Chin says when she first started swimming she didn’t take it seriously, as she was convinced the injury, a hairline fracture in her right knee would have healed quickly enough. Swimming was supposed to help the 2019 injury heal more quickly.

“I had always loved the water, and was going on and off, two trainings a week, and then I realized how much I enjoyed swimming, so I stopped thinking gymnastics completely and started swimming seriously six months ago.”

Her commitment sees her pushing herself beyond expectations and her coach Cuban-born Adolfo Morales, who has been training swimmers for the last 30 years, says she has tremendous potential, and he is encouraged by her ability in the 200 metres freestyle where she had a personal best of 2:22 seconds a 12-year-old.

“This is good time for freestyle in the stream she was in for 11 and 12 year olds,” Morales stated, the pride evidenced in his voice.

Like the rest of the city, Morales is disheartened and disappointed that there is no competition pool. “We dream of having a 50-metre pool, but we will take a 25-metre pool if we get one.”

Moving between pools not intended for competition, he says although extremely helpful in the absence of an alternative, makes it difficult to prepare for national and international swim meets.

Morales is confident Jamaica has the talent and the know how to produce Olympians in the pool, and feels resorting to training overseas is unnecessary.

“We have big big sporting potential here, but we need to change everything, because Jamaica as an island and I think 70 per cent don’t know how to swim.”

Morales wants swimming a part of the lifestyle of Jamaicans, more so, he wants the inequity of having to go to Kingston for swim meets to stop.

“If we have better conditions in the west, we will have more swimmers,” he stated.

On Friday, Leah accentuated her coaches point, earning the champion girl title for the 13-14 age group at the ISSA High School Swimming Championships.