Mount Pleasant, Harbour View expect the best from each other 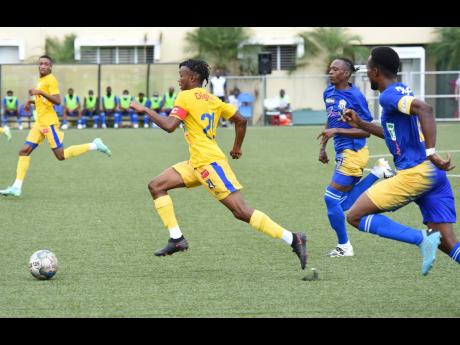 MOUNT PLEASANT and Harbour View head into their Jamaica Premier league (JPL) match this afternoon at 3:15 pm with nothing but three points in mind.

Mount Pleasant made a blistering start to the league last weekend, beating Humble Lion 4-1 and coach Wally Downes said his team’s preparation is geared towards getting the win.

“We prepare to win every game and this is no different. We have been strongly preparing for Harbour View from the first day after the [last] game. So we are prepared to win and that’s what we are hoping to do,” he said.

Downes believes the team still has room for growth despite a convincing first-day win and he anticipates that Harbour View will try to make things difficult.

“Harbour View played a very good game last week and we respect their abilities and we prepared for them.

“They will present different tasks in the game but we are prepared to overcome them. I have prepared the team as well as I can to win the game,” he stated.

Harbour View assistant coach, Sean Fraser, said they need the players’ full concentration for this match, as any lapse against the St Ann Club can be costly.

He pointed that they can’t afford to drop points consecutive weeks and are aiming for the win.

“They create a lot of chances. They have a lot of versatile players that can play anywhere up top.

“They do not stay static and they create a lot of problems for your defence, so we have to ensure we concentrate for 90 minutes. We will have to run a lot and talk because they never stop running,” he cautioned.

Despite Mount Pleasant having more experience players, Fraser believes the addition of national goalkeeper, Amal Knight, Ryan Wellington and Romaine Breakenridge has given them more balance this season.

He also noted that they have prepared for their opponents all this week and is hoping they can come out and execute.

“We respect the opponent but we have a job to do. We have young guys who played last season and got their feet wet and we have strengthened with Breakenridge, Amal Knight and Wellington from Waterhouse.

“We are not going into the game looking a draw because we have drop two points already. We are going to win.

“We have practiced a particular way for this game. It is just for the boys to go out and do what they have to do,” he said.

In the day’s other game at 1 pm, Humble Lion will be looking to rebound from the first-round defeat when they play Tivoli Gardens.

Humble Lion sit at the foot of the table after losing by the biggest margin on match day one.

Tivoli, who played to a hard-fought 2-2 draw with Harbour View, will start favourites to get the points.