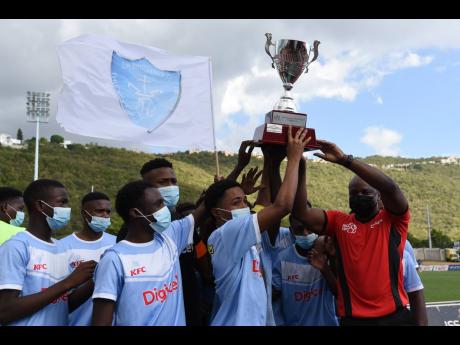 TO THE delight and relief of St Catherine High School head coach Anthony Patrick, retaining their ISSA/Digicel Walker Cup crown did not require another penalty shootout.

It is the second schoolboy football title for the school in as many seasons, following their breakthrough in 2019 before the COVID-19 pandemic resulted in a yearlong hiatus.

For 89 minutes, however, St Catherine High were facing the prospect of another penalty shootout, a scary proposition given the many misses they endured in a 2-1 victory over Excelsior in the semi-final.

Patrick could only chuckle when asked if he was relieved about not having to suffer through another game of chance to decide the result, praising his team’s resilience in settling the issue in regulation time.

For a school that until 2019 had never tasted schoolboy success, Patrick, who led Bridgeport High to titles past, said it was rewarding to see the reputation of the football programme grow.

“I have been a winning coach before. I have won the Manning Cup twice [at Bridgeport] and now I have won the Walker Cup twice at St Catherine. [But] it’s not about me, its about the school,” Patrick said.

KT’s place in the final was at the expense of Mona High who were disqualified after fielding two ineligible players in their semi-final.

Head coach Shaun Charlton said, “I am strongly supportive of them. They took the chance, they fought. They showed that they wanted to be here,” Charlton said.

“I know that they are young men, raring and ready to go and fight and show Jamaica that they can bounce back from whatever adversities.”

St Catherine looked the more threatening, especially in the first 10 minutes of the game. Joel Palmer managed to force KT goalkeeper Jaheim Orr into a save with a low drive that he handled routinely in the second minute.

Patrick’s side would get closer with their next attack as Dwight Gentles’ effort from outside the penalty area hit the crossbar, but no St Catherine player could get to the rebound.

KT had difficulties creating in the final third of the first half. Beeko Smythe’s tame shot did not test goalkeeper Croccifixio Thompson, and Maquan Aldridge’s long range effort sailed way over the bar.

Though KT were on the ropes for the greater part of the second half, St Catherine were particularly wasteful in the final third. Gentles could not make full contact with his half volley in the 55th minute and, minutes later. Jevin Parkinson’s low shot cannoned off the post.

KT’s best chance of the game came after the hour mark as a through pass found the feet of Tajae Medwinter, leaving him one on one with the goalkeeper. That chance was spurned by a last-ditch tackle by a defender.

St Catherine’s pressue did eventually pay off with a minute to go, as Richards’ header from a short corner soared over the goalkeeper’s head.