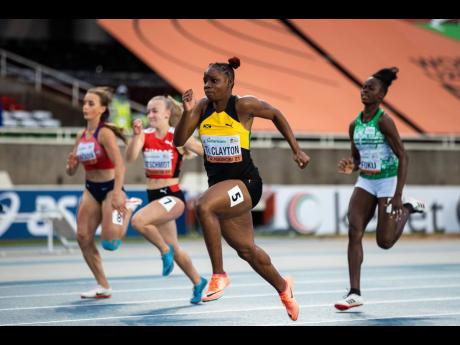 Interestingly, Clayton’s time was run into a negative 2.8 metres per second wind.

Clayton, the World Under 20 100-metre champion, after clocking a personal best 11.09 seconds for the win in Nairobi, Kenya last summer, was in a no- nonsense mood. Running out of lane eight in the first heat of the event, she sprinted away from her rivals for an impressive win in a time that wasn’t to be matched all day.

Clayton, who on Friday night picked up the VM Group Youth Award, the Issa Secondary School Award (Issa), along with awards for winning the 100 metres in Nairobi and the other for being a member of the world record 4x100m relay team, was pleased with her opening run of the season.

“I am very pleased to know that I was able to come out and win my first race in Class 1 and I am also pleased with the time, although the wind was very strong,” said Clayton.

“I was even more motivated to come out and run well at the meet after getting those four awards on Friday night. I am hoping to stay injury free for the remainder of the season and do my best as I want to stay disciplined as there are many outstanding athletes in Class 1,” she said after her winning run.

Clayton’s teammate, TheiannevLee Terrelonge also picked up a win in the half-lap event in Class 111 after clocking 24.68 seconds to be the fastest among her peers with Sabrina Dockery 24.74 of Lacovia High and Micheal Ann Lindo (25.18) of St Andrew Technical finishing second and third overall.

Kimberly Wright of Immaculate Conception was best in Class 1V after winning in 25.71 seconds with her teammate’, Kedoya Lindo, 25.92 ,and Ackeliah Whyte, 26.29 seconds, of St Catherine High in third place.

Carletha Bernard of Mt Alvernia High topped Class 11 with a 24.60-second clocking, while Mickeila Heidy of Immaculate was second in 24.61 seconds and Rohana Sudlow of St Catherine High third in 25.15 seconds.

The Edwin Allen High duo of Rickeisha Simms and Jessica McLean, who are favoured to dominate in the middle distances at the ISSA Boys’ and Girls’ Athletics Championships in April, were impressive winners in the 1500 metres.

In the 400 metres, Dockery of Lacovia High, following up on her second-place finish in the 200 metres, won in 57.05 seconds. Abbigail Campbell of Ferncourt High won the Class 11 event in 54.95 seconds, while in Class 1 it was St Jago High, Safia Hinds who came out on top in 54.65 seconds.