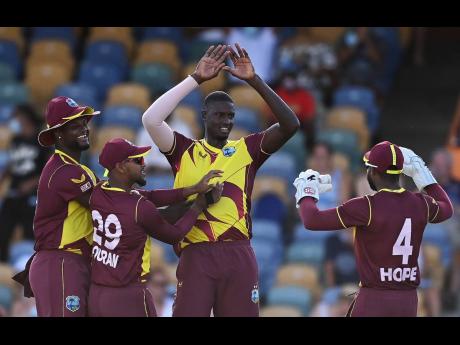 CWI photo
West Indies allrounder Jason Holder (centre) is congratulated by teammates (from left) Romario Shepherd, Nicholas Pooran, and Shai Hope for taking one of the four scalps he had during the first T20 International between his team and England in Barbados yesterday.

THE WEST Indies will be hoping they can put in another workmanlike performance and go 2-0 up today, following Saturday’s nine-wicket win over England in the opening T20 International at Kensington Oval.

Jason Holder and Brandon King were the stars of Saturday’s show, with the former enjoying a four-wicket haul from Holder which helped to dismiss England for 103. King then hit an unbeaten half-century which helped the West Indies ease to 104 for one in 17.1 overs.

It was the new-ball pair of Sheldon Cottrell and Holder that started the dominance for the home side, justifying the decision to bowl first.

In fact, the pair had the visitors at sea at 29 for five in just the seventh over.

It took some late hitting from Chris Jordan and Adil Rashid to spruce up the England score, with Jordan getting 28 from 23 balls and Rashid 22 from 18 to get the three Lions to 103 all out in 19.4 overs.

Player of the match Holder picked up the last two wickets in the final over to finish with four wickets for just seven runs in 3.4 overs while Cottrell ended with two for 30.

It was almost a perfect performance in the field for the Windies, and that momentum seemed to transfer to the batters, with Shai Hope and King playing positively in a 52-run opening stand.

Hope would eventually fall to Adil for 20, but King continued scoring freely, and he and Nicholas Pooran saw the hosts home with 17 balls remaining following another 52-run partnership.

The right-handed Jamaican King would end on 52 not out from 49 balls with four fours and one six, while Pooran was left unbeaten on 27 from 29 balls.

Winning captain Kieron Pollard was pleased with the effort and urged repeats for the remainder of the series.

“That’s the blueprint we ask guys to put on show. I am really happy for the guys in that dressing room because winning games is a rarity at this time, and being able to come out and win a cricket match wasn’t easy. To see the young guys come out and understand the situation, and finishing the game and coming not out, was fantastic,” said Pollard.

The teams will square off again this afternoon at 3 p.m. Jamaica time in Game Two at the same venue.