Holder urges consistency ahead of third T20 against England 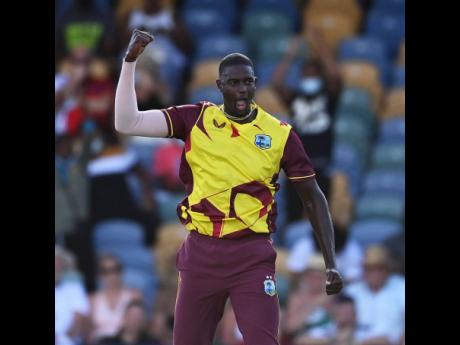 AFTER A nail-biting one-run loss to England in the second T20, the West Indies are buoyed by the fight and determination shown by their batting unit, as they look for an advantage headed into game three of their five-match series at Kensington Oval in Barbados starting at 3 p.m. Jamaica time.

Former captain Jason Holder faced the media in a pre-match press conference and the all-rounder is urging the team to be more consistent if they aspire to go 2-1 up in the series.

“The challenge is out there for each individual to breathe consistency. We have spoken about consistency for many years, but it is time we start seeing some progression and development consistently,” said Holder.

The West Indies came close to chasing down their second 170-plus target in four years in game two, a total that was necessary to chase because while the batting and bowling have held their own, the fielding has left a lot to be desired.

One of the culprits is vice-captain Nicholas Pooran who looked at sea in the outfield, with pundits questioning if the Trinidadian should don the gloves and let Shai Hope field.

For Holder, the events of the last two games are done and dusted, and the focus should be on today’s encounter and the remainder of the series.

“There is no point looking at the last two games. We just have to keep challenging ourselves to play a complete game. To be honest, we were not good enough in the field in the last encounter which hurt us in the end.”

The regional side may be tempted to stay with the same eleven; however, the England camp could make one change to their side with a fit-again Liam Livingstone being up for selection to bolster the bowling attack.

England coach Paul Collingwood is, however, keen to see his side add a bit more diversity to their game, as they look to take the lead in the series.

“We do have to get better at posting totals batting first and adapting to conditions. That is one area we always have to get better, but our intent and the way we played in the second game is very good and we want to continue that,” said Collingwood.