No defensive collapse this time for Arnett 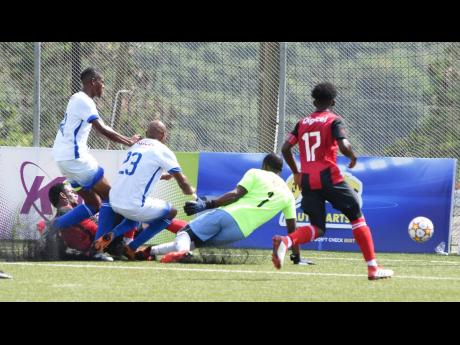 Contrary to the way their Jamaica Premier League season opener played out, Arnett Gardens avoided a collapse to get off the mark in this campaign at the UWI-JFF Captain Horace Burrell Centre of Excellence yesterday.

Arnett were seconds away from earning a point against defending champions Cavalier in their season curtain-raiser after equalising in the sixth minute of extra time before Cavalier’s Shaneil Thomas landed a knockout blow with the last kick of the game.

Assistant coach Eric Rademakers said that their improved defensive composure allowed them to do a better job in closing out Portmore for the first win in the Paul ‘Tegat’ Davis era.

“The way that we won, we managed the game much better than we did last time. It was one of the things that we wanted to improve on,” Rademakers said.

“We had the lead and to carry it into the full time is a great thing for the team.”

While both teams went after each other in the first half, there were minimal opportunities in the second for Portmore to get back into the game. Head coach Lennworth Hyde lamented the lack of aggressiveness which saw them losing many of the one-on-one duels around the park.

“The Arnett team outhustled us. They were higher in intensity than us. They won the first ball, the second ball. We gave up some goals because of our transitional game from offence to defence. “That’s why we lost the game,” Hyde said. We created a couple of chances but we should have scored.”

With both teams hunting for their first wins of the season, it was Portmore that got the perfect start in the first 10 minutes when a through pass found Hope who fired home past Arnett custodian, William Pryce. But the Junglists would waste no time in finding the equaliser.

The goals set the stage for an attacking half in which both teams had good chances to go ahead, although the majority of them fell to Arnett.

Damari Deacon had a shot just wide and Arbouine saw his goal waved away for offside.

But Portmore also had two clear-cut chances to regain their advantage. In the 32nd minute, Hope was put through on goal but only managed to lift his effort on to the crossbar. Minutes later Jevick McFarlane was also unlocked but he could only blaze his shot over the bar.

Portmore would rue those missed opportunities. A minute before first-half stoppage time as Arbouine was found in the final third and fired past Portmore goalkeeper Eric Edwards into the side of the net.