We can go further – Vere’s Stennett 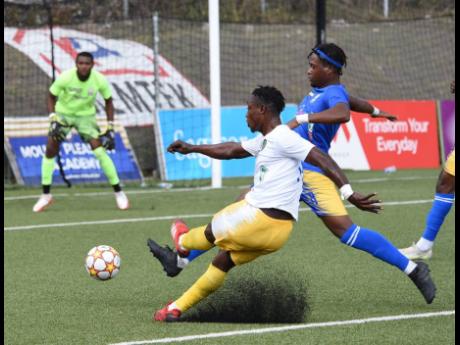 AIMING TO replicate the performances that saw them earn their first Jamaica Premier League (JPL) postseason appearance last year, Vere United assistant coach Rudolph Stennett says that they can elevate themselves further now that they will take no opponent by surprise this season.

Vere United got off the mark for the 2022 campaign, defeating Molynes United 1-0 in their game yesterday at the UWI-JFF Captain Horace Burrell Centre of Excellence.

The lone goal came from Javier Brown in the 29th minute, firing home from the penalty spot after Francois Swaby was taken down inside the box. While Vere United had some opportunities to double their lead, Molynes United found Vere’s defence too big an obstacle to overcome.

It is the organisation that has been the trademark of head coach Donovan Duckie which saw them march towards an unprecedented play-off berth last season, their first in the club’s history.With the aspirations of repeating that feat, Stennett says he is confident that they have another gear to reach this season, though he admitted it will take a concerted effort from all parties if they are to do even better this year. “We can reach further and we are going to do everything in our power to reach that. We just need everyone to be on board. We need support from the fans, from the owners, because good resources bring good results,” Stennett said.

“As you see now, they are putting in the effort and congrats to the boys again. They did a splendid job. But we are going to take it a step at a time.”Vere had no play-off expectations in Duckie’s first season in charge, concentrating more on crafting his team philosophy in the truncated season. The Clarendon-based outfit surprised everyone in 2021, finishing in the top six, a year after they were doomed for relegation. The 2019-20 season was cancelled because of the COVID-19 pandemic.

Stennett says that with the absence of warm-up games, he expects the team to be better conditioned as the season progresses.

“Right now we are setting short-term goals. Everyone wants to be in the finals. For now, we are going to take it one game at a time. For preseason we didn’t have any practice games. So the more we play, the better match conditioning that we are going to get and you are going to see better performances,” said Stennett.

Having surrendered the lead twice in their 2-2 draw against Harbour View last week, Molynes United head coach Garnett Lawrence said that they could not recover from the early setback and did not do enough to penetrate Vere’s defence. “We took too long to get our engines running. Once you give Vere a goal, it is going to be difficult to get back anything. They were very mean on the defence,” Lawrence said.

“We possessed the ball but we needed to possess it more in the final third.”

Despite suffering their first loss of the season, Lawrence says he is optimistic about his team chances this season as they continue to get settled into his system.