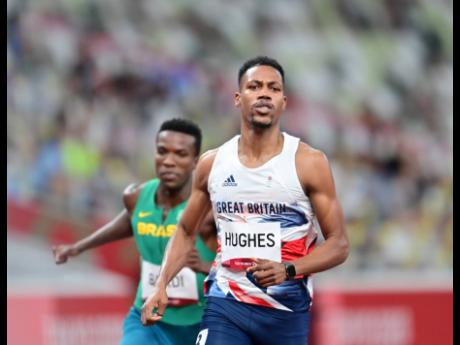 ZHARNEL HUGHES, the Jamaica-based European 100-metre champion, made a bit of British sprint history at the Tokyo Olympics but left the Japanese capital with mixed feelings. Both the success and misfortune Hughes had there have made him more determined than ever to excel in athletics.

In Tokyo, Hughes became the first man in a British vest to reach the Olympic 100-metre final since 2000, but a false start dashed his hopes. He’s using that disappointment as fuel for his 2022 campaign.

“So far, training is going pretty well. I’m happy with how things are progressing,” he reported on January 20.

“I came back to Jamaica after the Olympics and applied myself; no vacation, no family, just came back, debriefed myself and my coach, and you know, go over what happened at the Olympics. And I’m using that fuel going into this season and so far, I think I’m on the right path. Everything’s going according to plan. I’m feeling stronger, healthy, and I’m more determined than I have ever been,” said Hughes.

The Glen Mills-coached Racers Track Club ace has his mind on Linford Christie’s British 100-metre record of 9.87, retaining his European title, and reaching the podium in Eugene at the World Championships in July.

“I’ve written it down as a goal I’d like to achieve, and, obviously, trying to get a medal at the World Champs, Commonwealth, and also defending my title at the European Champs. All of that is on the table and I definitely think it’s reachable,” he pledged without a hint of bluster.

“I just need to apply myself, get some races in, and once I’m race-sharp, then I’ll be very competitive,” resolved the athlete with personal bests of 9.91 and 20.02 seconds for the 100 and 200, respectively.

Hughes, who did a year of high-school track and field in Jamaica at Kingston College, is philosophical about the setbacks he has faced, which include disqualification from the 200 metres at the 2018 Commonwealth Games after contact with eventual champion Jereem Richards of Trinidad and Tobago.

“You have to go through your failures in order to reap success. Over the years, I’ve had my ups and downs and ... I mean, injuries are a part of the thing and so far, knock on wood, I’m keeping fine right now. So I’m just hoping that I can show the world what I’m capable of, and not just the world, but myself, most importantly, and I definitely think it’s possible,” said the Anguilla-born sprinter.

“I’m coming closer to my prime now, where I’ll be much stronger and faster, so it’s just a matter of time now to go out there and show that it is possible. I can do it.”