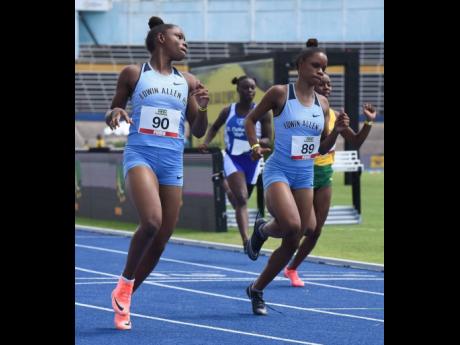 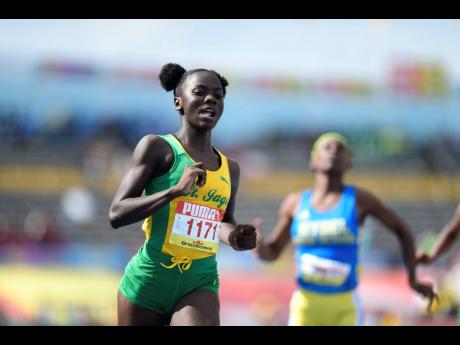 WHILE FANS eagerly await the clash of the two fastest women in the world over the 100 metres at the senior level in the Jamaican duo of Elaine Thompson Herah, the Olympic champion with a best of 10.54 seconds, and Shelly-ann Fraser Pryce, the World champion whose best is 10.62 seconds, there is another meeting that is certain to turn heads this season.

At the junior level, clashes among the Clayton twins, Tia and Tina from Edwin Allen High, and Hydel High School’s Brianna Lyston are set to produce fireworks.

Five years ago at the ISSA Boys and Girls’ Athletics Championships, Lyston, then 12 years old, had thousands of fans inside the National Stadium in a frenzy with two unbelievable performances after winning the Class IV 100 and 200 metres in astonishing times of 11.86 seconds and a record 23.72 seconds.

In the 100 metres, Tia was third in 12.28 seconds, and in the 200, Tina was fourth in 24.87 seconds. The performances by Lyston had fans talking for days after the Championships.

In 2018, Lyston was favoured to dominate both events in her first year in Class III, but the twins, Tia and Tina, had other ideas and both took the scalp of Lyston, the Class IV hero in the 100 and 200 metres. Tia won the 100 metres in 11.50 seconds while Lyston was third in 11.71 seconds, just 100th of a second behind another Edwin Allen dynamite in Serena Cole, who was second in 11.70 seconds. In the 200 metres, Tina was second in 23.71 second and Lyston fourth in 24.41 seconds as Hydel’s Gabrielle Matthews romped to an impressive 23.60-second victory.

The following year, 2019, was the year of the twins at the Championships as both showed great improvement, and Lyston, once again, had to play second fiddle.

In the 100 metres, Tina smashed former Sasheika Steel’s Class III record of 11.50 seconds to win in a blistering 11.27 seconds. Her sister, Tia, was second in 11.60 seconds, while Lyston had to settle for third in 11.61 seconds. In the 200 metres, Tia was first in 23.44 seconds, just edging out her sister, who was second in 23.46 seconds. Lyston was third once again in 23.73 seconds. Tina was on course to win the sprint double but eased down close to the finish after leading to allow her sister to take the win.

In 2020, fans were robbed the chance see the three face off after the COVID-19 pandemic put paid to all sporting events.

With the return of the Championships in 2021 and the athletes in their final year in Class II, expectation was high for more intense rivalry among the three, but this was not to be as Lyston moved from St Jago High School to Hydel and had to sit out the year.

The absence meant that Tina had things her own way, romping to a classy sprint double, winning the 100 metres in a record 11.38 seconds and the 200 metres in a wind-aided 23.45 seconds. Unfortunately, Tia was disqualified in the 100 metres after a false start.

With the World Under-20 Championships in Nairobi, Kenya, on the horizon after Champs, Tina’s best was yet to come, though Lyston had shown at a Velocity Fest meet that she was getting back to top form, especially in the 200 metres, where she won and took the scalp of Tina to give her rival a rare defeat.

Both went on to compete at the World Under-20 Championships in Nairobi, Kenya, where Tina stormed to a personal best 11.09 seconds to win the 100 metres, while Lyston, after a personal best of 23.18 seconds in the semi-finals of the 200 metres, was unfortunately disqualified in the finals after finishing a decent fourth.

This season, Lyston threw down the gauntlett at the Pure Water R. Danny Williams Meet at Jamaica College recently with a relaxed 11.92-second clocking, where she actually jogged over the final 20 metres to show that she is back for business and could reclaim her glory of five years ago.

What will make things even more interesting is the possibility of Cole’s plans to spoil the party. Cole, who ran a blistering leg on the world-record-breaking 4x100 metres relay team in Nairobi, is expected to do something special this season.

Coach of Edwin Allen, Michael Dyke, in an interview recently with The Gleaner, said Cole was ready for big performances. She will also be highly motivated as she has something to prove.

In Nairobi, Cole was the second fastest in the event but strangely, was not entered.