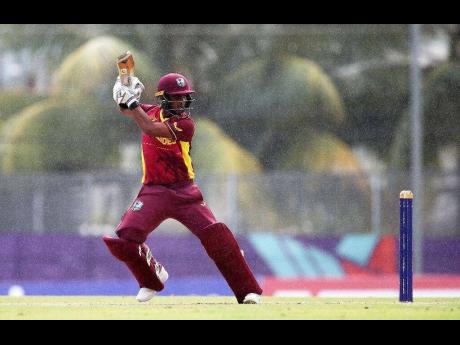 CWI photo
Matthew Nandu scores through the off-side during his hundred against Papua New Guinea in the Plate quarterfinals of the ICC U19 World Cup in Port-of-Spain, Trinidad, yesterday.

Matthew Nandu’s hundred propelled West Indies into the Plate semi-finals of the ICC Under-19 World Cup as the hosts clobbered Papua New Guinea by 169 runs here on Wednesday.

In their Plate quarterfinal at the Diego Martin Sporting Complex, the left-hander scored 128 off 134 deliveries as Rising Stars piled up an imposing 317 for six off their 50 overs after being sent in.

Nandu posted 155 for the first wicket with Shaqkere Parris, who struck 64 off 89 deliveries, while Kevin Wickham followed up his 50 against Sri Lanka with a stunning unbeaten 61 off 48 balls.

Aue Oru (27) and Peter Karoho (21) were the only ones to pass 20 as Papua New Guinea never found themselves in the hunt, especially after slumping to 65 for 5 in the 18th over.

The best stand of the innings was a 37-run, sixth-wicket partnership between Oru and Patrick Nou (15), but once they were separated, the last five wickets tumbled for 46 runs.

Leading the side for the match, Nandu reached his 50 from 62 balls with a boundary in the 23rd over before raising triple figures off 115 deliveries in the 42nd over with another four.

Once Parris fell in the 29th over, Nandu and Wickham, the latter of whom smashed three fours and four sixes, combined to plunder 107 for the third wicket.

Nandu was one of three wickets to perish in the penultimate over sent down by Boio Ray (3-43).