Oneofakind could turn the tables on rivals over a mile 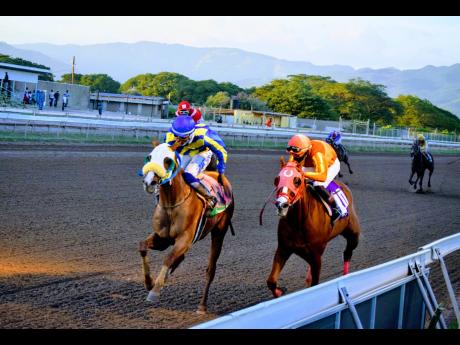 ACE MILER, ONEOFAKIND, has a crucial seven-pound advantage on last season’s three-year-old star, CALCULUS, who makes his four-year-old debut in Saturday’s Alexander Hamilton Trophy being run from his rival’s backyard – the mile chute.

It was on his second outing at the level, October 16, that CALCULUS met then four-year-old ONEOFAKIND for the first time. Though returning off a four-month lay-up, carrying topweight 126lb at nine furlongs and 25 yards, ONEOFAKIND finished fourth behind lightweight HOVER CRAFT, who outstayed EROY, getting 13lb from the United States-bred runner.

CALCULUS, running with 118lb, eight lighter than ONEOFAKIND, finished seventh, two lengths behind his off-the-break, topweight rival, who raced prominently throughout. They next met in the November 13 Jamaica Cup at nine and a half furlongs, ONEOFAKIND finishing down the track in the event won by stablemate FURTHER AND BEYOND, who stormed past CALCULUS to nail BILLY WHIZZ at the wire.

With the trainers’ stakes war between two-time defending champion Anthony Nunes and challenger Jason DaCosta at its peak, ONEOFAKIND again played possum behind hot stablemate FURTHER AND BEYOND, two weeks later, at seven and a half furlongs. However, EROY crashed that little party, sending Nunes’ title defence into a tailspin before FURTHER AND BEYOND redeemed himself in the Ian Levy Cup at eight and a half furlongs on December 26, slamming CALCULUS by six lengths.

Meanwhile, ONEOFAKIND, having not won an open-allowance race since June of that year, got his six-month get-out-of-jail card on December 18, allowing him to compete among overnight company. He collared three-year-old star BILLY WHIZZ early in the straight at a mile, prevailing by a neck with topweight 126lb, giving up seven pounds to his younger rival.

It should be noted that both ONEOFAKIND and BILLY WHIZZ were technically out-of-class in an overnight allowance. BILLY WHIZZ had lost by only a half-length to FURTHER AND BEYOND, at almost level weight, in the grade-one Jamaica Cup a month earlier, beating CALCULUS into third place.

Returning from a one-month break, looking lively at exercise and lighter than CALCULUS, mile-specialist ONEOFAKIND’s sweeping move off the home turn and strong stretch finish, especially with Robert Halledeen riding like a man possessed, could be the winning formula for Alexander Hamilton.