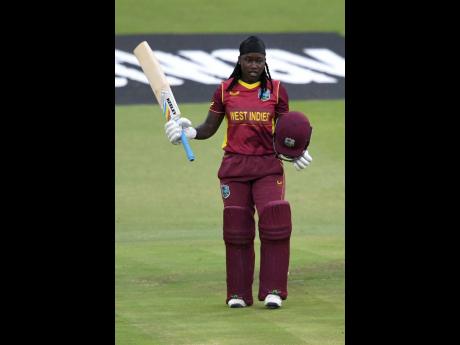 Deandra Dottin’s career-best unbeaten century highlighted what was a no result, as the West Indies took on South Africa in the first Day/Night One-Day International (ODI) in Johannesburg.

The diminutive right-hander stroked a masterful 150 not out while Hayley Matthews chipped in with 51, to set up the West Indies total of 234 for four in 45.3 overs before rain curtailed the innings.

When play finally got under way after the break, Duckworth-Lewis was brought into play and South Africa were asked to get 204 runs in 29 overs, with the hosts eventually getting to 87 for five in 17.4 overs before the rain put an end to the contest.

The West Indies total was built around a record 186-run third-wicket stand between Dottin and Matthews who dominated the South African bowling after Rashada Williams and Kysia Knight went for one run each.

The pair took control with some free-flowing aggressive stroke play with Dottin, who was scoring the second-highest total in West Indies women’s history, being her usual attacking self with 18 fours and four sixes in her 158-ball knock.

Matthews stroked four fours in her 63-ball knock of 51 while skipper Stafanie Taylor had to retire hurt on 12 after she was struck by a ferocious shot by Dottin.

For Dottin, the career-best knock was pleasing to kick-start what is shaping up to be a challenging series against the world number two ranked ODI side.

“Apart from the nerves at the start, I basically just wanted to occupy the crease and bat as deep as possible to get a good total on the board for the bowlers to defend,” she said.

That defence of the total started brightly for the West Indies, who had the home side in trouble after pacer Shamillia Connell sent back opener Laura Wolvaardt for six and Matthews and Karishma Ramharack picked up two wickets each, to leave the Proteas women on 87 for five before the rain came.

Dottin knows all too well that the South Africans will be coming back strong in the second game on Monday, and is urging the same focus and intensity from the regional girls.

“I am looking for more of the same because we know the South Africans are going to come back hard. It’s just for us to keep our composure and keep the pressure on and not get lackadaisical,” added Dottin.