Garvey Maceo stars looking to finish season on a high 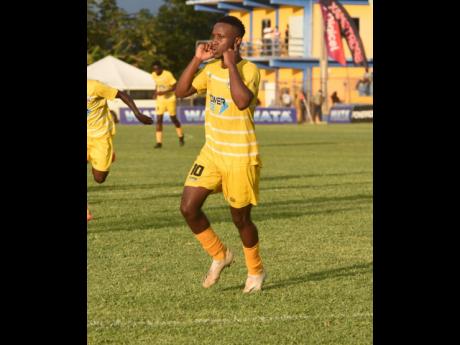 DaCosta Cup champions Garvey Maceo High School will be depending on their talismanic duo of Gregory Cousins and Cleo Clarke to show up once more in their ISSA-Olivier Shield play-off match this afternoon against Manning Cup winners Kingston College.

The pair tallied as many as 35 goals between them this season with daCosta Cup Golden Boot winner Cousins amassing 19.

Cousins said they are looking to bring the curtain down on the season with a bang.

"It's a pretty good feeling being able to deliver for the team and doing so with a title. The job is not yet over, we still have the Olivier Shield and we want to deliver that one also," Cousins said

When asked if his stint in last season's Jamaica Premier League (JPL) with Vere United gave him an advantage coming into the season, he added: "I learned a lot from the JPL and brought that knowledge into the daCosta Cup."

Both combined for all eight goals for their team in the semi-finals and final of the daCosta Cup and Cousins, who seems to have a telepathic partnership with Clarke on the field, said playing beside his strike partner is a pleasure.

"I like to play with him. He is a skilful player that can shift (dribble), kick and do everything. We both know how each other's plays and it's the same for the rest of the team because we have been playing together for a while," Cousins said.