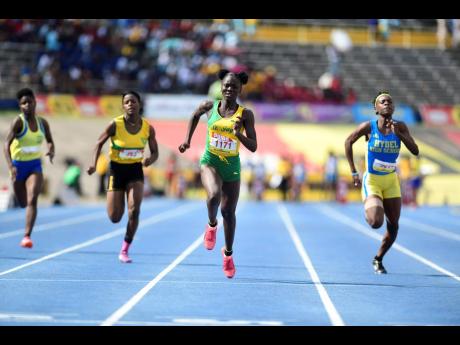 SANDREY DAVIDSON, Brianna Lyston and Gregory Prince cranked up the speed on Friday afternoon at the first staging of the ONDIRUN Sprint Fest, held at a damp GC Foster College of Physical Education and Sport. The fast trio posted the fastest 100-metre times of the season.

In a unique format, featuring only the 100 metres, Hydel High School student-athlete Lyston delighted onlookers with a smooth effort timed in 11.51 seconds.

At Jamaica College a month ago, she eased off the gas a long way from the finish but on the rain-dampened track at GC Foster, the 2021 World Under-20 200-metre finalist stayed on the accelerator all the way.

Prince, last year’s National Under-20 200 champion, was cautious at the start in his heat of the Class I event but repeated his heat win from Jamaica College in 10.70 seconds. The tall St Jago High School sprinter didn’t want to relive his 200-metre false start nightmare from the Queens/Grace Jackson meet on January 29. Afterwards, he commented, “I didn’t get any start but I’d rather be late than false start so I’m working on it.”

“First and foremost, I’d like to thank God. My strategy going out there was to get a start and just drive away from the pack and just keep my form through the line,” said the World Under-20 4x100 silver medallist. It worked.

Also impressive were Mark Anthony Miller of JC, the reigning Boys and Girls’ Championships Class II 400 champion, and Alana Reid of Hydel. Miller used his long stride to notch a Class 2 leading time of 10.77 seconds and Reid, who was second in the Class 2 100 metres at Boys and Girls’ Championships last year, hammered out a clocking of 11.76 seconds despite a pesky 1.2-metre per second headwind.

Half of Jamaica’s World Under-20 4x100 winning team was on display at the Sprint Fest. Gold medal starter Serena Cole of Edwin Allen High School logged the number two Class I time – 11.72 seconds – but that was a stroll into a 1.6-metre second headwind. Similarly, Hydel’s gold medal third leg ace Kerrica Hill was impressive at 11.84 seconds in Class II. Only Reid was faster.

Meet director Wayne Long of Ondirun was a happy man when it was all over.

“I feel good. Tired, exhausted but elated that it has happened,” said the veteran results processing manager. As always, he was happy to help.

“At least, all the athletes got a chance to run. We did set an example so people could see how the meet could be run efficiently, so for that I am grateful,” Long said in an assessment of the Sprint Fest.